Nowadays, the chance of spotting analogue instrument panels in cars is getting slimmer every day. The development of modern cars keeps on going and the instrument panels need to keep up with this progress. The manufacturers may still try to make the dashboard look like it’s analogue, but the inputs for the gauges are all computerized.

The main reason for modernizing the instrument cluster is the introduction of the CAN-network. Because of this network, all the data can be sent through one single flatcable instead of using multiple wiring harnesses throughout the car. This also makes it possible to let multiple computers access the same data at the same time without interfering.

The digital instrument panel of the Renault Scenic II 2003-2008 is a good example of these modernized cockpits. Almost all data is gathered from the CAN-network and the instrument panel has its own EEPROM and processor, so it can process and store all of the incoming information. But the progress these instrument panels have made are also their weak link when it comes to malfunctions: all stored data, for instance, the mileage can be corrupted very easily.

To be honest with you, these instrument panels tend to malfunction very often. The French aren’t exactly known for building reliable car electronics and these clusters show us exactly why the French have this reputation. In this case it wasn’t hard at all to actually make the remanufactured instrument panels more reliable than the original devices. If you search the internet a little, you’ll notice very quickly that this isn’t just our opinion. Customers from all over the world are complaining a lot, not only about the poor build quality, but also about Renaults customer service. Yes, it really is that bad.

The problems often start with short shutdowns and the cluster constantly switching off and on again. These problems will get worse in time and in many cases the instrument panel will shut down permanently. Not only is this permanent shutdown really annoying, it also causes the mileage to get corrupted. This corruption is a permanent one and can only be restored by resetting the mileage with a special computer. Another problem that we’ve noticed is the clock is resetting to 0:00 all the time. This could be due to a faulty battery but a malfunctioning instrument panel also displays this kind of malfunction. 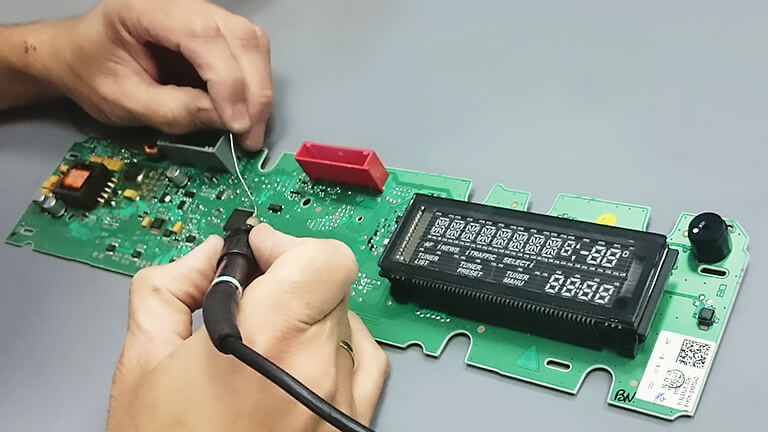 The instrument panel isn’t designed to send out data to other devices. That’s why we never get to see any fault codes due to a faulty instrument panel. The malfunction is purely focussed on the cluster itself.
Most of the malfunctions as described above are caused by weak solder joints. But we just can’t repair them all with some simple soldering. Not all joints are mendable and some cracks will cause additional damage. Creating new joints and replacing devices like the processor and the EEPROM are necessary most of the time. You also can’t rule out the fact that those devices may also malfunction their selves. An EEPROM may be built to handle over 100.000 processes, but failure is always possible.
Replacing components like processors and EEPROMs makes reprogramming inevitable. This requires special equipment and loads of knowledge. Luckily we’ve mastered this skill, so we can create every configuration we like: adjusting the mileage, changing the panels language and so on. Because of our own research we now know how to use and adjust the hexadecimal signals of the CAN-network in a way that we can control the outcome. So if an EEPROM fails, we know exactly how to repair and reprogram this.

We just can’t tell you guys enough: ACtronics strives for quality. It’s would be a lot easier to just repair the broken joints and return the item to our customer, but that isn’t the way we do business. Every single instrument cluster is getting the full treatment, which means that every component that’s known to fail at some point will be replaced or improved.
The final check is very precise. The instrument cluster has to withstand a certain amount of pressure on both ends of the circuit board in a way it will bend. We also vary the current between 10V and 16V. And on top of that we simulate several inputs to be sure the cluster is working properly. Only when the device passes all these tests, we apply the big black screen again. This won’t be the original screen, but a brand new one. It’s all part of our way to show you the quality of our services: it’s not only remanufactured from the inside, but you can also see the difference on the outside.

The instrument cluster in detail

Behind the big black screen you will find a large circuit board with two displays placed on it. The large display shows you the basic functions like speed, rpm and fuel level. The small display is mainly used to show functions like time, outside temperature and radio information. Each display has its own connector.
We see all kinds of signals reaching these displays. Not all signals are coming through the CAN-network yet, but this instrument panel clearly shows that the CAN-network is getting more important every day. When you take a look at graphic below, you’ll notice the big importance of the CAN-network for this dashboard.

Instrument panels are not only capable of receiving CAN-messages, but can also calculate, store and transmit these values. Like described above, the instrument cluster of the Renault Scenic has an EEPROM (Electrically Erasable Programmable Read-Only Memory) and a processor. The EEPROM does exactly what its name says: it lets the other components read, store and erase data. Some examples: 1. The processor uses the EEPROM to read values, like mileage, recalculate these values and then store them again. 2. The display uses the EEPROM to display the currently stored mileage.
You can imagine that a lot can go wrong when this process suddenly shuts down, right in the middle of a calculation. Data could get corrupted when an interruption takes place exactly at the moment that the processor is trying to store new data. The stored data isn’t complete and that stops the whole process. That’s why we often see incorrect mileage-numbers.
This instrument cluster doesn’t transmit information to other devices. Data like current speed and several engine values are being spread already through the CAN-network, so it simply isn’t needed to send any additional values.

This is the easy part. To remove the cluster from the dashboard, you first have to remove the plastic trim which covers the bolts. Remove the upper part of the trim first and the lower part second. Once these are removed, you can clearly see the Torx-bolts. Remove the bolts one by one. That’s basically it. You can now pull the panel in your direction. It’s wise to pull out the bottom first, since the panel has its connectors on the upper side.