Did you know that this throttle body is also used by Maserati and that no less than 4 of them are assembled onto the Lamborghini V12? Yet, this Volvo Magneti Marelli throttle body became known (infamous?) as the Volvo throttle body, putting a large burden on Volvo, even making them suffer from bad publicity on national television. Fun detail: during the broadcast, a final solution was being discussed, one we developed at ACtronics. But, what are the exact faults in the throttle body? And what brings us to a solution?

Let’s start with the Volvo error codes that occur once the throttle body does not function properly anymore, since reading out is often the first thing done when the engine failure light goes on.

This error code is triggered by an observed difference between the current positions of both the accelerator pedal and throttle body. Under normal circumstances, the throttle body should respond to a change in the accelerator pedal position within 0.4 seconds. When this takes any longer, the ECM (ECU) will interpret this as an error. By the way, this was eventually changed to 0.9 seconds in a software update.

These error codes and symptoms all point towards the ETM which is where the problem should often be found. We will go deeper into the technique in and around the throttle body, but we can already reveal that the position sensors at both sides of the throttle body are known to be weak spots. The sensors still use sliding contacts (wiper) resulting in unavoidable damage. So at some point, the sensors will be worn out to such an extent that they fail to work properly. In such case, the ECM does not continuously receive information about the position of the throttle valve anymore, which in turn leads to plenty of other problems.

Not always a defective throttle valve

A well-known problem comes with the risk of always pointing at the same element as the culprit when deviations occur, while in some cases this is not always right. Speaking of which, we recently came across a good example on a Volvo forum. The person concerned owned a Volvo that suffered from a highly fluctuating speed (rpm), even while driving. Of course, all fingers immediately pointed at the throttle body, but even replacing it with a new one did not solve the problem. And so began the search. Eventually, the electric control valve of the camshaft seemed to be causing the problem: it was seriously polluted and therefore not functioning at its best. After a thorough cleaning, the engine worked as usual again and the fault never came back. So, the moral of the story: avoid drawing hasty conclusions, but take time to come to a correct diagnosis.

Given that we are dealing with mechatronics (a component consisting of both mechanics and electronics), the Volvo throttle body is remanufactured by our Mechatronics department. We purposely talk about remanufacturing instead of repairing, since our goal at ACtronics is to permanently fix all known weaknesses instead of (temporary) repair. We have always had this mindset from day 1, also regarding the Volvo throttle body and our R&D team developed a wonderful solution, of which we can say that a remanufactured throttle body is more reliable than a new one.
The position of the throttle valve is measurable without making contact, meaning no more wear!

But, before we zoom in on that wonderful solution, we start at the entry-test. Before we start the actual remanufacturing process, it must first become clear if and where the throttle body is defective. This is where we use our Cyclone 3 test setup, where air is actually blown through the throttle valve in order to simulate all circumstances as optimal as possible. In addition, we conducted extensive research on messages send via the CAN which resulted in being able to fathom its functioning.

Once remanufacturing seems to be necessary, the throttle body is completely disassembled. Not only position sensors are removed but also the electric motor, butterfly valve and ECU of the throttle body. Literally each component is processed or replaced. In this phase, the state of the old components is not relevant, since the remanufactured throttle body must always be returned to the customer in new condition, so nothing may be skipped. We reuse components that at least comply with the OE specification. We purposely mention “at least” because we prefer a better alternative if possible. 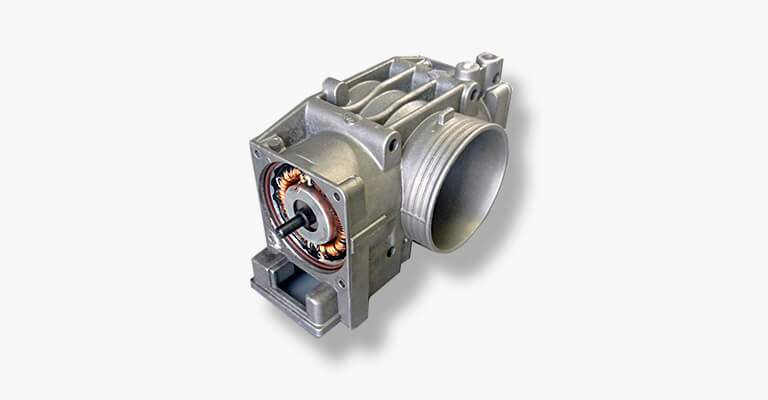 Two components of the throttle body require some more explanation: the two throttle position sensors. The R&D team have studied the sensor’s functioning with the aim of finding an alternative following another principle, but with the same operation. With this in the back of their minds, they searched for a method that allowed contactless measurement of the throttle valve position to eliminate the disadvantage of wear. A solution was found in the Hall effect. The new position sensors that are assembled onto the remanufactured throttle body do not look like the originals at all, but do their job just as good (or even better) than the original sensors.

And then it is time for calibration and a comprehensive final test. We won’t go into all the technical aspects of these complicated procedures, however it is interesting to know that a vast body of specific knowledge is required regarding voltages, signals and CAN messages. Our work would have been so much easier if we could simply replace the position sensors with better ones, but in reality it is not that simple. Fortunately, ACtronics have enough knowledge for proper completion of also this part of the remanufacturing process.

After remanufacturing, the throttle bodies will look like this:

The ETM in detail

The Magneti Marelli throttle body is part of the ETC: Electronic Throttle Control. This fly-by wire system uses information from the Throttle Position Sensor (TPS), the Accelerator Pedal Position Sensor (APPS), the wheel sensors, the speed sensor and sometimes also a few other sensors to determine if and to what extent the throttle valve must be adjusted. This sounds complicated, but the principle is easy to explain by first focussing on the TPS and APPS. We will therefore now explain how these sensors work.

Although many people think that the inside of such a sensor is full of complex processes, both the throttle position sensor and the accelerator pedal sensor are in fact no more than just potentiometers, also called voltage dividers. These voltage dividers use a fixed resistive element which is often made of carbon that conducts the voltage. A sliding contact moves along the resistive element and its position determines the amount of voltage that must be transmitted.

In case of the throttle position sensor:

The more the throttle valve opens, the further the sliding contact of the sensor is pushed towards the starting point of the resistor: a high amount of voltage is now transmitted to the ECU, that exactly knows the extent to which the throttle valve is opened.

In case of accelerator pedal sensor:

The more the pedal is pushed down, the further the sliding contact of the sensor is pushed towards the starting point of the resistor: a high amount of voltage is now transmitted to the ECU, that exactly knows to what extent the pedal is being pushed.

This principle works very well but has one major disadvantage:

Wear. That is why, regarding throttle position sensors and accelerator pedal sensors in newer cars, a shift towards the Hall effect took place. The Hall effect is the production of a voltage difference, across an electrical conductor, transverse to an electric current in the conductor and to an applied magnetic field perpendicular to the current. The principle is more or less the same as that of the potentiometer, but without the disadvantage of wear.

Now that we know how both sensors function, we are able to take a closer look at how these sensors collaborate in the ETC. The entire unit works according to a closed-loop system, meaning that it uses the current position of the throttle as a reference for adjusting it or not. The huge advantage of this system is that it is easily extended with features such as adaptive cruise control and stability control. Since the ECU (and not the accelerator pedal) eventually determines the position of the throttle valve, other inputs, such as those from the wheel sensors, can also be taken into consideration in that decision. The throttle valve became more intelligent (and therefore also a lot more complex) because of this development.

Finally, many topics are left for further explanation, but we choose one that could help with making the right diagnosis: the pin assignment of the plug. Power and mass can be measured on pin 5 and 6. In case there is also an oscilloscope laying around the workshop, incoming and outgoing CAN messages can be measured through pin 3 and 4. The signals of pin 1 and 2 are less interesting for making a diagnosis in the workshop, since they are used by the vehicle for sending the duty cycle and receiving diagnosis information.

The alignment process can go wrong, generally because of the following reasons:
1. A throttle body with another part number or other software version is assembled.
2. Another component (a sensor for example) that collaborates with the throttle body is defective.