A winter without snow isn't really a winter, is it? Despite the fact that a thick layer of snow can change the landscape into a very idyllic picture, it also brings the necessary dangers. It turns out that the number of road accidents doubles if it snows and there is five centimetres of snow on the roads. This is caused by poor visibility and of course by longer braking distances. But how can you keep this braking distance as small as possible, in slippery conditions? 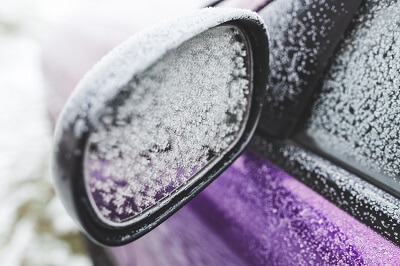 The right tyres are not the only way to help on the road during a snowy day. It is possible to use your car's ABS system to your advantage as well. Read on to find out how!

How does the ABS system operate?

The ABS system or anti-lock braking system is - as the name suggests - a system that ensures that the wheels of the car do not lock during braking. The ABS uses speed sensors to determine whether one of the wheels is not rolling. If so, the hydraulic system will interact. The hydraulics reduce the amount of braking force on that wheel by modulating brake force.

Why is the brake distance longer on a day with snow? Surely the brakes cannot lock because the ABS system? This is partly true, but it is slightly more nuanced. The purpose of the ABS is to prevent wheels from locking and not to shorten the brake distance. An important factor is of course the surface on which is driven. On a soft and slippery surface like snow a car simply has less grip than on dry asphalt, which means that the braking distance is longer even though the brakes do not necessarily have to lock.

But how can you use an ABS system to your advantage during the winter when it has snowed? That is exactly what Tim O'Neil figured out. There is quite a bit of discussion about the usefulness of the ABS in winter. According to some, an ABS would be detrimental when it snows. Tim made the following interesting video about that.

As it turned out, when the brake pedal was fully depressed, the car without ABS had a shorter braking distance than a car with ABS. An ABS system works best on a dry surface such as asphalt. On snow, however, you need a little more subtlety to use the brake system. It may not feel very natural, but to shorten the braking distance it is important to press the brake pedal very gently. As Tim says in the video: "The softer the surface, the softer you have to brake."

The ABS is therefore a very important part of the car, both in summer and winter. However, an ABS is a sensitive part, the electronics are exposed to all kinds of weather conditions and vibrations. Components or connections on the printed circuit board can fail as a result. Common problems that can be caused by a faulty ABS are for example:

Do you have problems with an ABS and would you like to have it remanufactured? Take a look at the ABS-ECUs that ACtronics remanufactures. This is a long lasting solution that is also cheaper than buying a new.