There is not much in today’s cars that is not measured and controlled by sensors, actuators and computer systems. Provided they are well designed, these systems can perform actions much more rapidly and much more accurately than we humans could ever do. Manual transmission has also undergone considerable changes. These gearboxes are increasingly being fitted with mechatronics that can take clutch and shifting operations completely off the driver’s hands. A well-known example of this is the DSG 6 transmission used by Volkswagen AG.

But how does DSG work? And what can ACtronics do if a DSG 6 transmission fails to work properly?

The name DSG gives you a bit of a clue as to how it differs from the old “manual gearbox”: it stands for Direkt-Schalt-Getriebe, or Direct Shift Gearbox. The system works many times faster than a conventional gearbox, partly because the next gear is already pre-selected, due to a DSG 6 having two clutches, compared with only one for manual transmission. Similarly, there are also two primary shafts. So really you have two partial gearbox units available that work together in a single housing, one for the odd-numbered gears and one for the even-numbered ones. As you can imagine, this can provide many advantages, but also entails considerable technical challenges.

Let us first examine the mechanical configuration more closely:
To get two primary shafts to work with a single rotating crankshaft you have to have an unusual arrangement. So for the DSG 6 transmission a large hollow primary shaft (green) was opted for, inside which a second primary shaft with a smaller diameter (red) can freely rotate. In this way you have the technical advantages of two primary shafts in the space occupied by just one. And both of them can be engaged with their own gears at the same time. This has the advantage that during shifting only shaft 1 has to be disengaged and shaft 2 can immediately be re-engaged. This means that the lag in shifting from one gear to another is eliminated entirely, since this is done at a different time: during the quiet moments when no gear-shift is required (more about this later in a practical example).

However, two primary shafts also need two clutches of their own and how do you design a clutch system that can make both primary shafts engage with the engine? It quickly became clear that engaging the clutch with a pedal was not the solution for this, so an automatically driven clutch was developed. The wet disk clutch opted for is a combination of a clutch with a smaller diameter for the green primary shaft and one with a larger diameter for the red primary shaft, both of which can rotate freely in a housing.
However, how do you then ensure that both clutches can handle the same torque loading? The solution was to make the clutch with the smaller diameter thicker. This modification means that the smaller clutch can handle more torque per mm2. The large-diameter clutch does not require this modification and has therefore been made thinner. In this way both clutches can handle the same torque loading, even though the diameters are different.

The clutch is operated by two solenoids, which can drive both the “green” and the “red” partial gearbox units and so engage one of the shafts with the engine. One large movement of the system thus disengages one clutch and a split second later directly engages the second clutch and this is what makes the gear-shift so much faster than manual shifting: instead of disengaging the clutch, shifting, then engaging the clutch again, just one operation by two solenoids is needed to change gear.

The mechanical gearbox section has thus been nicely thought out, but is completely useless unless a very clever piece of mechatronics is designed around it. This is because the system will have to perform the clutch and shifting operations entirely independently at any time and under any circumstances, with no lag and without making the wrong decision.

This is where the Transmission Control Unit (TCU) comes into the picture. The TCU is the DSG transmission’s brain. It consists on the one hand of an electronics unit, which uses vehicle parameters and sensor values to make the decisions. It also contains actuators that can operate the built-in clutch and shift solenoids. And that is also the meaning of the term mechatronics: a component containing both mechanical and electronic units (such as an electrically driven throttle).
We will not go into too much detail, but the input received by the TCU varies from the position of the accelerator and brake pedal to information sent from the ECU, such as the engine speed. All of this information is constantly being processed and if any action is required the solenoids are immediately actuated. The TCU, then, is actually constantly making predictions and it is very tricky to be able to arrange this complex interplay of operations correctly at all times.

To explain a little more clearly the precise function that this mechatronics unit performs in the DSG transmission, we have also written a practical example, including diagrams. The diagrams show the hydraulic operation when the solenoids are actuated.

Example: You accelerate as fast as possible from a stationary position to 80 km/h, but then you immediately have to brake for a traffic light

While the vehicle is stationary the mechatronics unit is still active, so even before you drive off a lot of things are going on. The clutches are kept in the neutral position by the solenoids, the red primary shaft is engaged with 1st gear and the green primary shaft is in fact already engaged with 2nd gear (see 1st diagram in this article).
The mechatronics unit comes into action as soon as the accelerator is depressed a long way. The input from the accelerator position forces the electronics unit to start making decisions. As a result, the solenoid of the “red” clutch is actuated and immediately engages the red primary shaft. How quickly and how vigorously this occurs is calculated on the basis of a range of variables, such as how far the accelerator is depressed and what the current engine speed is. The gear-shift must be fast, but also as smooth as possible.

Once the engine speed has reached the maximum for 1st gear it is time to shift to 2nd gear. The position of the accelerator and the engine speed are again among the factors providing input, the electronics unit decides that a change of gear is required and the solenoids of the clutches are actuated. In this case the red primary shaft is disengaged and the green one is engaged. The car can now continue to accelerate.

Once the vehicle is in second gear and still accelerating, it is time for the next decision. The red primary shaft is still engaged with 1st gear. Is it better to stay engaged with that gear or to switch to 3rd gear? The input from the increasing engine speed and the fact that the accelerator is still pressed down a long way make the electronics unit decide to actuate a hydraulic actuator that engages the red primary shaft with 3rd gear. 3rd gear has been pre-selected. 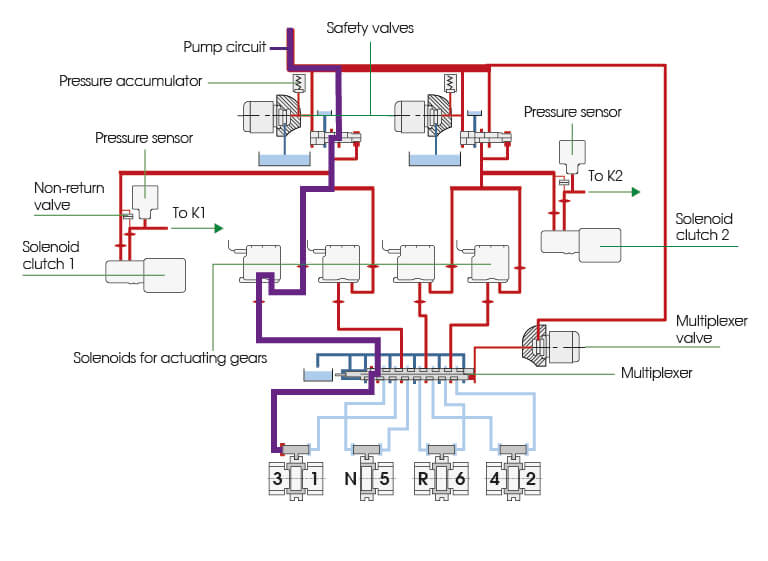 And then 80 km/h is reached and the driver has to brake for the traffic light. The input from the accelerator disappears and is replaced by the input from a depressed brake pedal. The electronics unit registers this, but does nothing for the moment. The engine speed is still high enough and, if the driver decides to accelerate again quite soon, 3rd gear must be ready to be used. The engine speed drops further and further. Eventually the electronics unit makes the decision to actuate a hydraulic actuator that engages the red primary shaft with 1st gear. 1st gear has been pre-selected.

You can guess the rest of the tale: 1st gear is engaged and if the vehicle comes to a halt the clutch is placed in the neutral position, with 1st gear pre-selected. You can perhaps imagine now that DSG does not work well if the mechatronics unit is not functioning properly. This very long tale takes place in less than 10 seconds. And a possible manual input from the “gear lever” has not even been taken into account.

Gear lever is actually not even the right word: it is a “selector lever”, which sends the input to the TCU. To make it more recognisable, however, it has been made to look like an old-fashioned gear lever (see photos below as examples), but it could just as easily have been a knob.

This additional option for sending instructions to the TCU makes the decision-making process just that bit harder. Whether the selected input is processed at once or not also depends on other variables. The eventual decision is made by the electronics in the TCU and in fact the input from the selector lever is only used if all other inputs allow this. You are probably gradually realising just how complex the system actually is. The TCU really has to take lots of factors into account.

But what happens if the TCU stops working properly? Can anything be done about that?

ACtronics has studied the problems and has been able to find several causes inside the TCU. An overhaul routine has been developed by means of which we can repair the TCU and still keep the same quality as a new original component. We have also built a real-life test set-up on which we can perform extensive tests on any DSG 6 mechatronics. So you should not always trust the advice of various DSG specialists and DSG doctors – they will nearly always say that the only option is to replace the TCU, whereas in many cases it is quite simply possible to perform an overhaul.

Did you know, by the way, that our service starts as soon as the TCU is shipped? ACtronics knows better than anyone how vulnerable mechatronics can be and so uses special purple transport crates for them so that they can always be shipped safely. These transport crates contain a filling that is the same shape as the product so that it cannot move.

The DSG 6, code number DQ250, is one of the many examples of gearboxes for which we can overhaul the mechatronics. This DSG is commonly used in several models of cars made by Volkswagen AG, like:

Finally, a clear video that gives a good explanation of the DSG’s make-up: