Is the ABS light illuminating in the car? Then there are problems with the anti-lock braking system. There can be various causes that cause a fault, from a broken control unit to a broken ABS sensor. ACtronics offers the possibility to have an ABS unit remanufactured instead of repaired.

The anti-lock braking system ensures that the brakes do not lock up during braking. The electronic system ensures that braking is applied in a pumping manner and the wheels cannot block. An ABS module consists of various components: hydraulic pump, sensors, ECU and the pump motor. As is the case with ECU’s, ABS ECU’s are divided into two groups: the ECU’s with a conventional PCB and the ECU’s with a hybrid PCB. 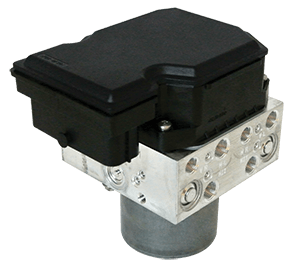 Remanufacture of an ABS-pump and other components

Do you only want to have the ABS pump or pressure sensors repaired? However, we assume the entire ABS unit, i.e. the ABS ECU including pump motor and HCU. Experience teaches us that also pump motors and components on the HCU’s can become defective. These therefore became part of our remanufacture process.

Testing and repair the ABS-modules

ACtronics has developed its own test set-up to test ABS units. The Vision 6 test platform is used for unit testing. This system is able to fully simulate the operation in a car. In case of defects, a temporary solution (connect / gluing) is not chosen, but instead a more durable solution is carried out when remanufacturing an ABS unit. To ensure that a remanufactured product performs just as well as an original one.