The O1J Multitronic is a typical modern CVT and uses mechatronics for its control (more about this later). Next to automatic transmission driving, it enables manual transmission. Well… at least something that looks like changing gears manually. CVT stands for Continuously Variable Transmission, meaning that the system is stepless. Yet, to give the driver the feeling of driving a manual transmission, the system has 6 fixed positions programmed in its memory that are used once the “manual” mode is chosen.

Although the 01J Multitronic seems like a wonderful solution, the system is not exactly faultless. The maximum torque is limited, the mechanical parts wear and the control of the CVT (the mechatronics) sometimes fails. As many probably know, the mechatronics consist of mechanics (the labyrinth) and electronics (the TCU). In this case, it often concerns the electronics when something is wrong. The TCU, named Temic Multitronic / Hytronic VL300, uses sensors to measure things like the input speed, output speed, clutch pressure and fluid temperature. You can imagine that the system is not able to function properly once a signal of one of these sensors does not reach the processor.

In case something becomes defective in the 01J Multitronic gearbox, this will be noticeable in almost all cases: the car does not start, an “F” appears in the display, it is not possible to set the car to “R”, the transmission is poor… all kinds of complaints that are caused by the TCU or defects in mechanic parts of the TCU. Our advice is to always check if the CVT is mechanically in perfect working order, before suspecting the TCU. Need technical support? You can always contact our Customer Service.

Each defect has its own error code. Still, a complicated system with many sensors and actuators, contains a lot of error codes. Furthermore, Volkswagen AG (of which Audi is a part) uses its own error codes, not making it any easier. That is why we composed a comprehensive table that can be found at the end of this article. Remarkable detail: errors regarding the multifunction switch (F125) are overrepresented.

Our remanufacturing process solely focuses on the TCU, not on other components of the transmission. We therefore do not recommend sending the labyrinth with it to prevent transport damage. Since the cause of complaints / error codes can also be mechanical, we always perform an entry test on all incoming components. Once the problem is identified, the process continues.

We cannot stress enough that ACtronics does not just repair defects, but remanufactures products. We know that TCUs are sensitive and want to be absolutely sure that each remanufactured TCU lasts at least as long as a new one. In order to do so, we do not only repair the defects we observe, but guide every TCU through a standard process. In this process we professionally remove the protective gel if needed. Once all components are unprotected, we can start with repairing and replacing. Placing new connections is a delicate process, but not a problem for us, looking at our years of experience in doing this.

After this, we have come to the final test. This test is required to examine if all features function properly. Our testing facility enables us to simulate the functioning, just like it does in a real car, such as the supply of signals from the different speed sensors. This is what distinguishes us from other repairers. Finally, the remanufactured TCU is provided with a special gel for protection. We close the ECU with a new cap that is developed by ourselves.

However, our care does not stop after remanufacturing the product. Thought has been given to the issue of packaging the ECU. Sticking out sensors easily become damaged. This is why we developed special transport packages for multiple TCUs, to minimalise transport damage.

Tip: Think about how you pack your product. Always adequately protect weak parts. In case you would like some additional advice on how to pack a TCU, feel free to contact us.

The 01J Multitronic in detail

Therefore, we will first try to briefly explain the principles of the CVT:

A gearbox with a continuously variable transmission basically consists of two pulleys and a pushbelt. The gear ratio from the engine to the drive shafts is steplessly adjustable, due to adjustable radiuses of both pulleys. This adjustment functions hydraulically. By providing or reducing the oil for the pulley, the sloping sides of the pulleys move towards or from each other. The closer these sides get towards each other, the more the pushbelt of the pulley is pushed of its central ‘‘position’’ in an outward direction: resulting in a higher radius of the pushbelt around the pulley. By varying the distances between these sides, the gear ratio can be changed.

Solenoid valves and speed sensors are required to manage the degree to which the pulleys adjust themselves. The velocities of both the driving pulley (motor side) and the driven pulley (differential side) are measured. It is up to the TCU, the Temic Multitronic / Hytronic VL300, to determine the amount of oil that the valves transfer to the pulleys, in order to adjust the gear ratio. However, the Temic Multitronic / Hytronic VL300, manages four valves, not two. What are the other two for?

Next to controlling the gear ratio, the VL300 is also responsible for the basic control of the automatic transmission: P, N, D and R. The third valve operates a mechanical fork that ensures that the gearbox is set into one of these positions. You could compare this with the fork of a manual transmission, but this differs regarding the fact that this is controlled by a hydraulic valve. The fourth valve is used to control the clutch which is, by the way, a double wet clutch, like it can also be found in the DSG 6 02 E. Audi does not use a torque converter whereas Mercedes does.

After reading this story, an expert will rightly say that more than 4 valves can be found in the 01J Multitronic gearbox. This is correct, but the other valves are not controlled by the TCU. The extra valves are there to regulate the pressure in the system. The pressure being too high or too low can already cause damage.

Now that it is clear that the Temic Multitronic / Hytronic VL300 is responsible for controlling all these components, it might be easier to imagine that various complaints may arise once one or more valves are not controlled like they should. The TCU is literally the key element of the system. However, except for errors regarding sending commands to the valves, other problems might arise when the TCU does not receive the correct input. The TCU receives its signals from the speed sensors (that are attached to the TCU) via a CAN bus connection. An interruption or deviation in these signals can have major consequences.

Finally, another tip: a test you can perform yourself as a technician is measuring the voltage going through the plug. Therefore the pin assignment of this plug is showed below: 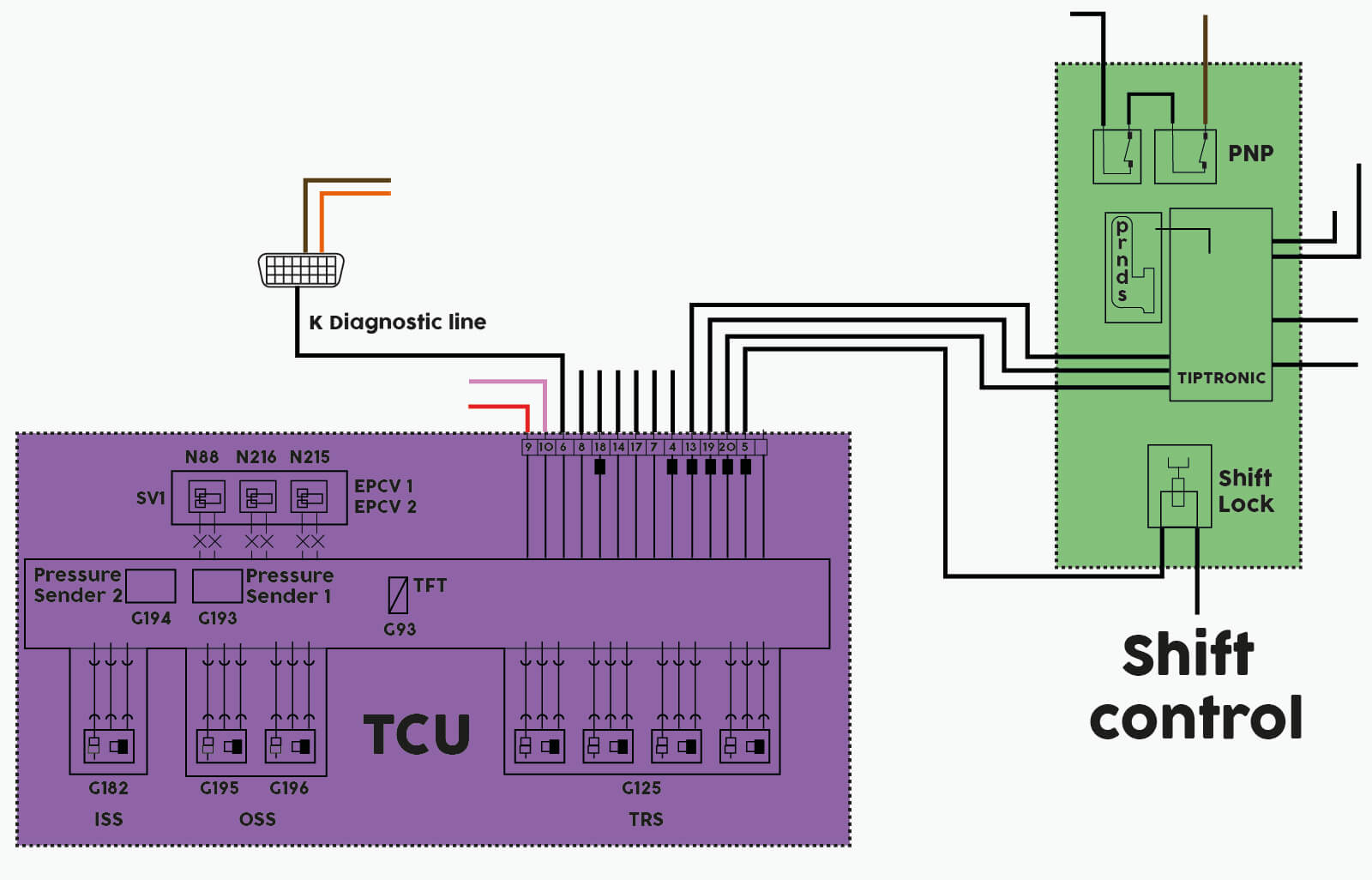