Suppose: as a car brand you want to deliver city cars with automatic transmission, but the conventional automatic gearboxes are way too big and heavy. What do you do?

Manual gearboxes are regularly robotised. This is in fact a good solution because one is able to build up a car with the same manual gearbox. Only a mechatronic part, that controls the clutch and the gears, like the Easytronic F13/5 Bosch does, needs to be added to change it into an automatic transmission. Problem solved, right?

As it turned out, it’s not that simple. It is dif?cult to control the clutch smoothly without damaging the clutch disc. This is because a TCU (Transmission Control Unit, the brain of the system), cannot feel what we humans feel when releasing the clutch. Furthermore, the TCU is assembled in an area suffering from many temperature ?uctuations and vibrations, that could cause many defects. Another thing is, is that the system consists of many moving parts and everything that moves can become defective. So it is quite a challenge to ensure that the system will function in a reliable way.

Let’s start with the most important external issues when there are complaints: 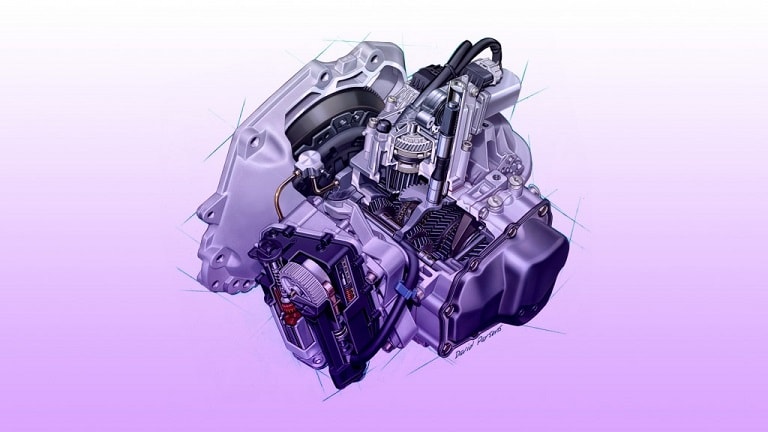 A clutch is always subject to wear, so it is wise to ?rst check the clutch and the pressure plate, before paying attention to the rest of the gearbox. Because the clutch is controlled automatically, the driver won’t notice that the clutch starts to show signs of wear or has a worse performance. The automatic transmission is ‘all of a sudden’ defective.

Also checking and replacing (when needed) the hydraulic ?uid is no unnecessary luxury. Many cases are known where the system has not had maintenance for years and where ?ushing and bleeding solved the problem. Flushing and bleeding the hydraulic circuit has even more advantages: possible defects with the clutch actuator (see below for more information) are easy to be detected. The bleeding-procedure is so detailed, that during controlling the clutch actuator, defects easily become visible. Often the actuator is (partly) defective.

The ACtronics-tip-of-the-week: check whether the crankshaft sensor is continuously functioning and whether it is an original one. Damaged crankshaft sensors are more common and the display will show the well-known ‘F’. Suppose you would disassemble the entire gearbox, send the TCU for repair and then discover that the problem is only caused by a simple sensor..
Except for all these external defects, there might be problems with the mechatronic system itself. Also in this case, the display will show ‘F’ and the gearbox will badly or not shift in gear. The systems broadly consists of three parts: the Easytronic, the Gear Selector and the gear lever. Each part has its own defects that are all quite different:

Easytronic is the name for the mechatronics that control the clutch. It consists of a TCU, a clutch actuator and an electric motor. Each part has its own defects. Luckily, there is a qualitative solution for each problem. 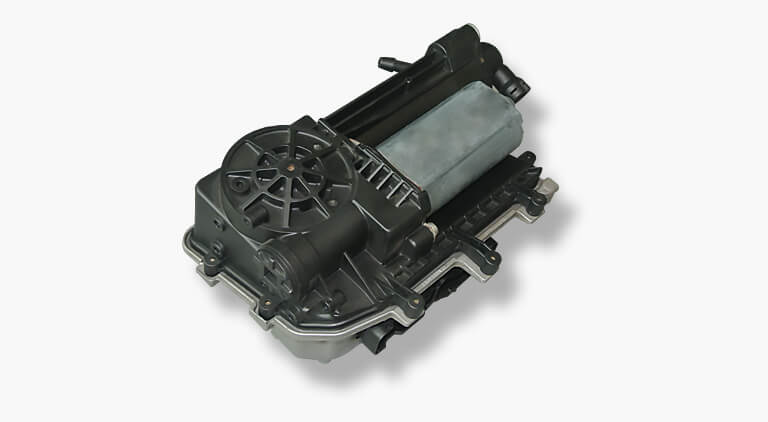 The Gear Selector – not to be mistaken with the gear lever – literally does what its name says: selecting the gears. It consists of two electric motors, both controlled by the TCU that is located in the Easytronic. So actually the Gear Selector is not a separate component, but a separately assembled part of the complete Easytronic-system. This makes it somewhat complex, because sometimes the term Easytronic is used to indicate the entire system and other times it is used to describe the part containing the TCU. Added with the confusion about ‘Gear Selector’ and the ‘gear selector’ (gear lever, right?), the chaos is complete…

… but still we’ll try to summarize this chaotic and illogical story: Easytronic = only the component with TCU and clutch control. Gear Selector = electric motors controlling the gears. Gear lever = gear lever, so no Gear Selector!

So… more clear, right? Now let’s look at the defects of the Gear Selector:

It probably won’t surprise you that the electric motors of the Gear Selector sometimes have defects. It is subjected to high loads and makes a lot of movements, causing the electric motor to show signs of wear quite fast. Does this cause error codes? Yes it does, but it is important to mention that after ?nding one of the following error codes, the problem is not always caused by the Gear Selector. We often receive Gear Selectors where we later ?nd out that the problem should be detected in (a mechanical defect) the gearbox itself. 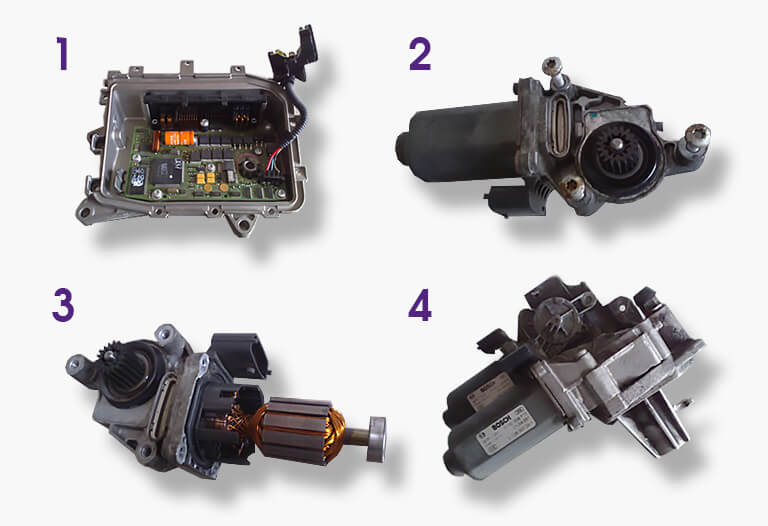 The gear lever sometimes causes strange malfunctions. The mechanism is not mechanical, like it is the case with standard manual gearboxes. The lever operates the gears by sending a signal to the TCU in the Easytronic. One should see the gear lever more as some sort of joystick. The type of signal depends on the position of the gear lever. You can imagine that the system does not function like it should, when the signal does not reach the TCU. What causes this? Very often, the contacts of the various modes (R, N, D…) are damaged. 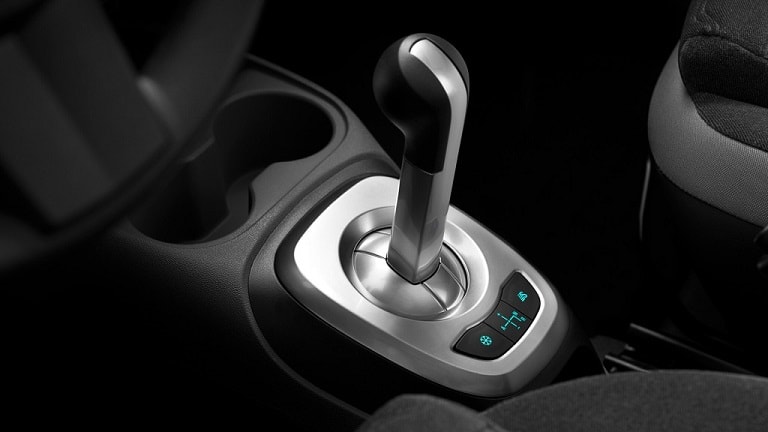 In short, many things can go wrong. A good diagnosis is essential to ?nd a good solution, next to using the appropriate terms…

We will only explain the process of the Easytronic.

Because we know that multiple components of the Bosch Easytronic F13/5 can become defective, we do not just repair and solve the problem but guide the Easytronic through the entire remanufacturing process. During this process, the TCU, clutch actuator and electric motor are all separately handled. We ?rst properly clean the product before we open it. After this, the separate processes follow.

The TCU has multiple critical points. Therefore we treat all weaknesses preventively, whether they are defective or not.

The clutch actuator, sometimes called the clutch pump, can start leaking or become stuck. When repairing it is no longer possible, of course we’ll replace it for a new component.

Just like the TCU, we know the electric motor has multiple critical points. That is why this component goes through a standard process where all weaknesses are checked.

Finally, we assemble all components and test the complete unit in our special test environment. We are then able to test and check everything, so the Easytronic only goes back to the customer when we are absolutely sure that it functions like it should. 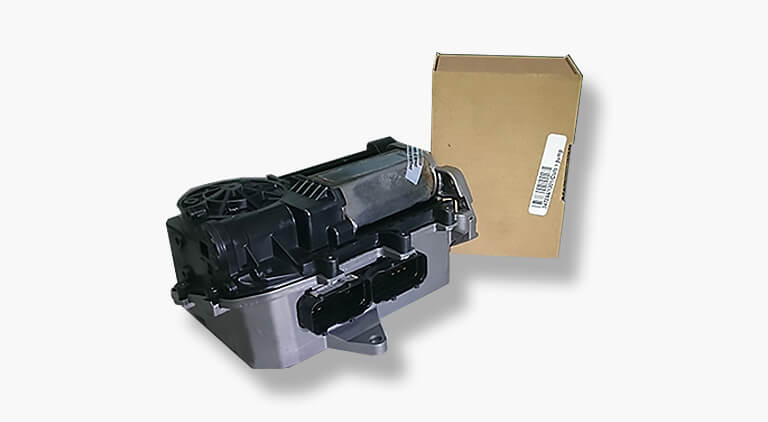 After what we have already explained, it is too complex to get into further details so we won’t, but we do want to share the following with you:

The gearboxes with Easytronic F13/5 Bosch can be found in the following Vauxhall models:

Disassembly of the unit

The (dis)assembling process is so complex that a disassembly instruction is currently being developed. Once that is available we’ll place a link here. For now we advise that it is very important to disassemble the clutch actuator (clutch pump) and don’t send it when it functions properly, because it is very sensitive to transport damage.