On the outside there’s not much difference between the Durashift and Easytronic clutch actuators, however the ECU on the inside is where the difference lays. Because the ECU and the software cannot be seen very easily, another way of differentiating between the two is that the Easytronic system is on Vauxhall vehicles and the Durashift system is found on Ford’s & Mazda’s.

Alongside the clutch actuator, there will be a pair of selector motors. These are controlled by the mechatronics and will select the required gear when told too by the clutch actuator. Our testing and remanufacturing methods for these units have changed. We now require the need to send both the actuator and the selector motors.
We believe having both units and testing them together as they would be on the vehicle not only provides better test results but means we are able to offer an improved, more reliable remanufacture.

The mechatronics that control the clutch consists of a TCU, a clutch actuator and an electric motor, with each part having its own common faults.

These common faults mostly include:

Which will cause the following faults:

As there are three parts to the mechatronics, the remanufacturing process can become complicated especially as there are multiple known components that can become defective. 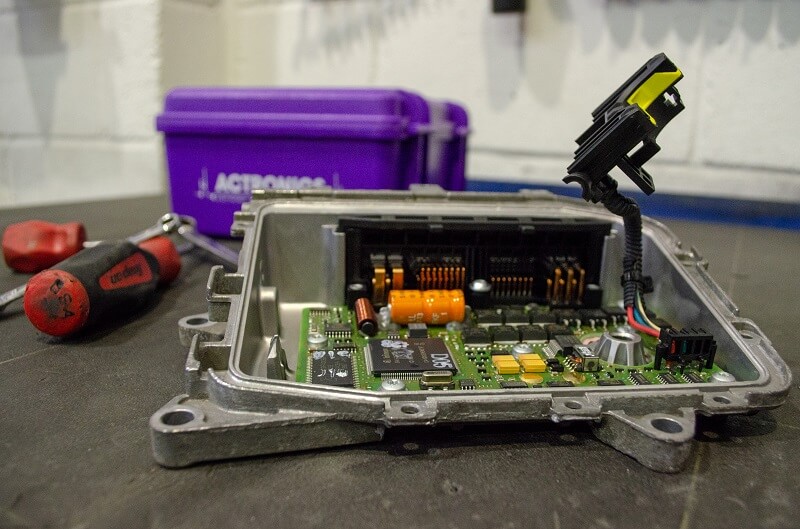 Hardware components on the PCB of the TCU can become defective like any control unit and will require replacing if faulty.

The clutch pump can start leaking or become seized. If this happens a replacement pump is required.

If the electric motor has failed, this is usually down to the ‘brushes’ inside the unit becoming worn and/or seized. If this is the case, the ‘brushes’ will require to be replaced.

Because of these known components, the remanufacturing process will include replacing all of these to ensure that the unit is back to its original factory condition.

Some of the faulty electronic units we see, may have become faulty due to an external feature failing or due to poor vehicle maintenance, which could include:

When sending the unit back to customers, we remove the plastic clutch pump from the unit, because we have found that this becomes damaged during transit. If this is not fitted correctly, the unit will not re-learn its parameters and will fail to work on the vehicle.