How does a ECU work in a car?

The ECU is the brain of the engine and therefore an indispensable part of today's car. While driving, the control unit is constantly gathering information in order to be able to control other parts. But what exactly does such an ECU measure? And what is the most important function of this part? These questions will be answered in this article.

The era for the ECU: the carburettor

As said before, it is impossible to imagine modern cars without an ECU unit. But how did it go 'in the past'? Before engine control equipment was used in cars, car manufacturers used a carburettor to control the air-fuel mixture. However, this technique has one major disadvantage: the system is static. One ideal adjustment had to be found for really all circumstances: cold or hot, damp or dry, economical or just a lot of torque ...

It was almost impossible to find a good mix between power, fuel consumption and emission values that worked under all circumstances. Driven by the fact that the cars had to be cleaner and cleaner, the ECU offered the solution. After all, a unit can adjust the mixing ratio for each situation and thus always ensuring an optimal fuel injection.

An optimal fuel injection has everything to do with the relationship between the amount of oxygen and fuel. If there is a shortage of oxygen, not all fuel burns, resulting in a loss of power, but if there is an excess of oxygen, there is also a loss of power. As the experts know, the optimum combustion ratio for a complete combustion is between 14.7 to 1: one gram of petrol requires 14.7 grams of air. Unfortunately, this ratio is not suitable for every situation. The most power you have at a ratio of 12.5 to 1 and the most economical you drive with a ratio of 15 to 1. It is therefore up to the ECU to estimate which ratio is best for each situation at a given moment.

Input for the ECU 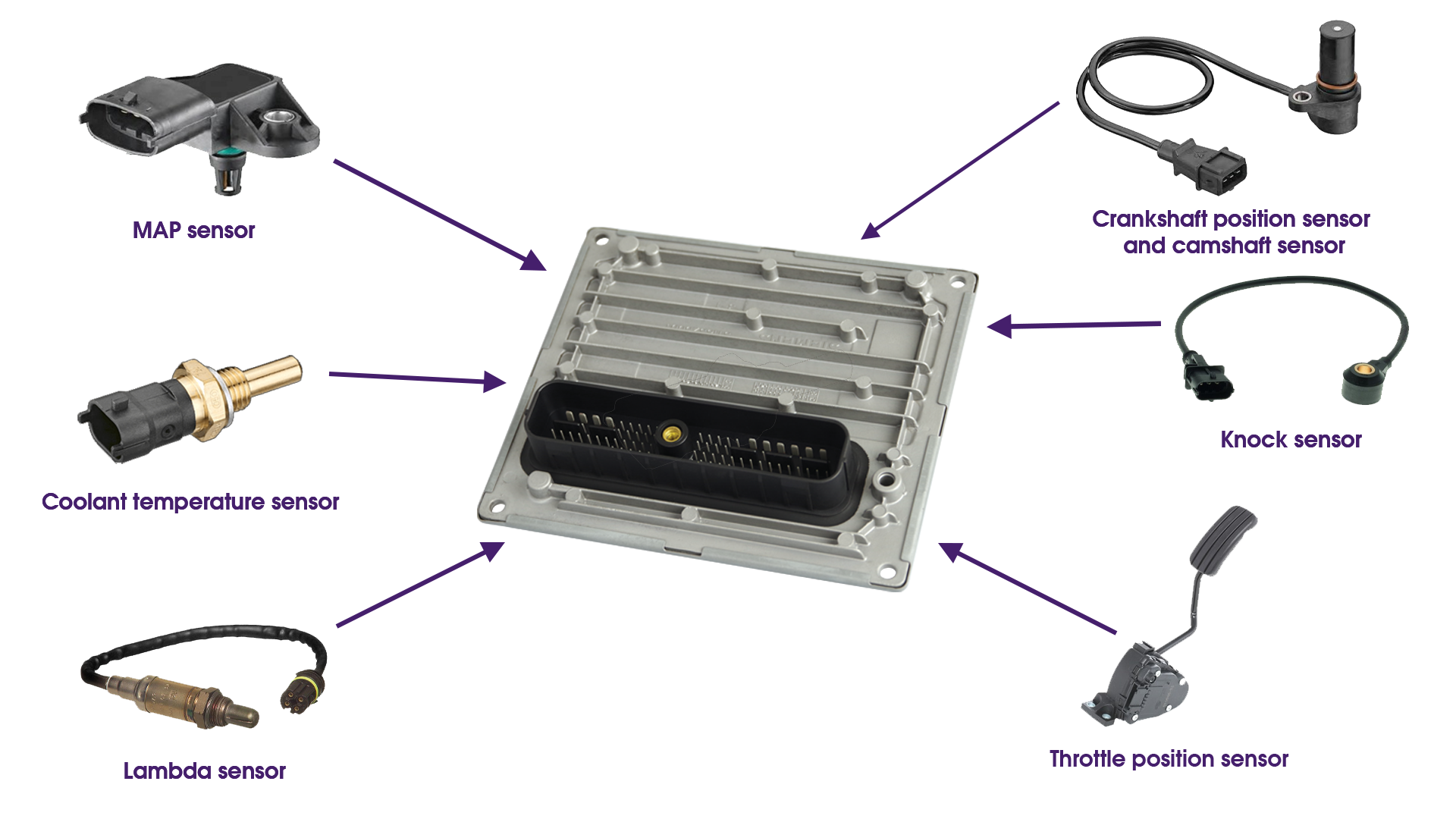 To control the fuel injection, the processors in the ECU will have to be put to work. For this purpose the ECU receives information from numerous sensors. It is too much to discuss all these sensors. Therefore we will discuss below some of the most important sensors that provide input to the engine control unit.

The lambda sensor is a sensor also known as the oxygen sensor (O2-sensor). This sensor literally measures the amount of oxygen in the exhaust gases.

This method is also used to 'synchronize' a four-stroke engine at start-up, so that the ECU knows when to inject the fuel. The crankshaft position sensor is often used as a source to measure the engine speed. So you can imagine that a problem with this sensor has a direct effect on the overall operation of the fuel injection system.

The knock sensor measures when detonation occurs: the moment when petrol ignites too early and on its own. The blow (or knock) caused by this is detected by the sensor and immediately passed on to the ECU. The self-ignition of petrol can cause considerable engine damage, so the unit needs to adjust some things immediately. Usually in this situation the injection moment is adjusted.

From input to output

Output of the ECU

The generated output information will also have to be sent to different parts in the car. Which information flows, depends very much on the type of car. In cars with a turbo-injection engine, for example, it is quite possible that the ECU transmits information to the turboactuator via the CAN network. However, as mentioned before, the most important function of the ECU is the optimal performance of the engine by computer-controlled fuel injection.