What is the first car that comes to mind when we say "roadster" or "coupe"? Chances are that you’re thinking of a BMW Z4 or Mazda MX-5, right? However, the Audi TT has also built up quite a reputation over the decades. And that is a bit strange, especially since the TT was initially criticized on crucial points. You can read exactly what we mean by that in this article!

History of the Audi TT

First of all, let's go back in time: from the moment the first drawings of the TT were put on paper, until the moment it was taken into production. Anyone who thinks the TT is a completely German product is wrong, because the TT was designed in Volkswagen's Design Centre in California in the spring of 1994. And what kind of car do you draw on paper once you get to the hear California Dreamin ' beat? Right: a roadster / coupe-like car! And that is exactly what the designers Freeman Thomas and Peter Schreyer came up with. But what name do you give such a sporty car? For this, Audi went back to its past:

The TT is called the TT for an important reason. As you probably know, Audi is a combination of the brands NSU and DKW. The first brand took part in the Isle of Men TT for the first time in 1907, while DKW even won that race in 1938. NSU claimed this name in the 1960’s for their sportier 'high performance' models of the NSU 1000 and NSU 1200. The Competition version that NSU unveiled at the end of the 1960’s was called the NSU 1000 TTS and delivered 83hp, in contrast to the 55hp the 'normal' TT produced. Due to their low weight, these cars were very popular among motorsport enthusiasts and they were eagerly used in various racing classes. After NSU (and also DKW) merged not much later and became Audi, the name TT actually always remained untouched.

Just a random fun fact: did you know that NSU is not originally a motor- or car manufacturer at all? In 1873, NSU was founded as a manufacturer of knitting machines! After a takeover in 1886, NSU decided to develop two-wheelers and in 1901 the first motorcycle was unveiled by NSU. 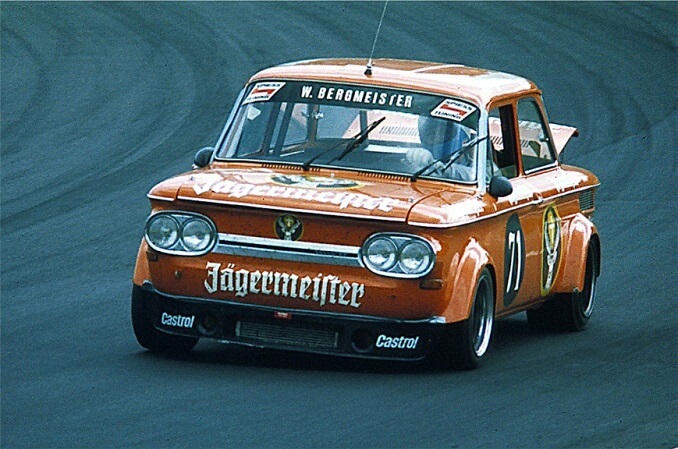 In 1995, Audi presented the first concepts of the Audi TT at the IAA motor show in Frankfurt. Despite the fact that the brand new Renault Megane, Volvo V40 and even the BMW 5-series were unveiled at the IAA Frankfurt of 1995, the Audi TT was the eye-catcher of the show. And why? In addition to the sporty appearance and excellent performance that the car delivers, it’s also extremely practical and looked very well built. And all this on an existing basis. The TT is built on the PQ34 (A4) platform, the same platform as, for example, the Golf 4 and the Audi A3!

After the successful unveiling at the IAA, it would be only a matter of time that the TT will be taken into production, right? But it didn't go that way. That had nothing to do with the enthusiasm within Audi. On the contrary: Audi really wanted to make a success of this car. However, the design presented the necessary challenges. Until then, cars were often welded together, but according to the designers of the car that would not benefit the design of the car. In order to present the car to the critical customers as neatly as possible, Audi opted for a new laser technique in which the panels would be joined together.

In the meantime, almost three years had passed, when Audi finally came with the redeeming message that the TT was really ready for production. But was the design of the car still somewhat the same? Surely that would have changed in those three years, as it always happens with a concept car? We can actually be very brief about that: the coupé, that was officially unveiled in September of 1998, has remained virtually unchanged. Only the rear windows are different, but otherwise there were actually no significant changes to the car.

Apart from the delayed introduction, everything had actually gone smoothly. However, Audi had underestimated one subject: the driving characteristics of such a sporty looking car. Of course the car had the same basis as a VW Golf, but the hordes of motoring journalists had great expectations of the first test drives. Unfortunately, the TT was quite disappointing and oh boy, the journalists really had a go at the TT.

Unfortunately, the TT did not only lack some sportiness, but also was a little dangerous to drive. As long as the car was traveling at "normal" speeds of up to about 60mph, everything went pretty well. However, as soon as the TT was kicked on its tail (which you are going to do with such a car), it went completely wrong. The rear of the car felt very loose and unstable at higher speeds and this repeatedly caused dangerous situations and accidents. So something really had to be done about this. 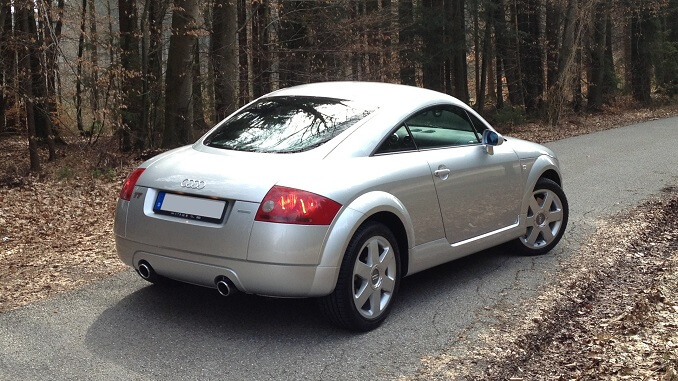 In March of 2000, more than a year and a half after its introduction, Audi finally came up with a solution. To overcome the problems with oversteer and unstable driving behaviour at higher speeds, a call was made from the Audi factory in Ingolstadt to Gerlingen, 250 kilometers away. This is where car electronics giant Bosch is located, the company that a few years ago also solved the stability problems of the Mercedes A-Class. The solution was therefore quickly found: Bosch's latest ABS with ESP functionality (the ATE MK20) partly solved the problem. In addition, the wishbones were strengthened and customers were given the option to equip their car with a rear spoiler free of charge. Aesthetically, however, this spoiler never quite suited the car, which was designed as minimalistic as possible.

Even after the reintroduction of the 1.8l Audi TT, the enthusiasm of many car enthusiasts lagged. Yes, the car still looked nice, but the performance and handling that many enthusiasts were looking for, were just not there. In addition, Audi now had another problem: Porsche meanwhile had unveiled the Boxster and Honda also made a car for this targeting group and launched the S2000 in 1999. These two cars appealed to B-road drivers more than the TT.

Although the TT Coupé was less popular with car entusiasts, the Audi TT still attracted the attention of a large audience. Thanks to its sporty and trendy look and the high-quality interior, the TT appealed to the imagination of a large group of people who were looking for a fashion-conscious car that matched their trendy lifestyle. This is not directly the target group that the TT takes to the circuit to run on the edge of the rev limiter. So they had no problems with the less good driving characteristics of the TT at high speeds.

Did you know that one of the TT's options was a special "Baseball Leather" interior?

The fact that the car wasn't seen as a driver's car, was something that bothered Audi. The NSU TT, which can be seen as the predecessor of the Audi TT, always had that appeal to the car enthusiasts. The roadster introduced in 1999 could not really change this. However, this began to change in 2002. Although the Quattro version, which was also available from 1998, delivered 225 hp, Audi decided to take a look at the engine department of big brother Volkswagen. And what did they see there? A very thick 3.2 litre six-cylinder engine that was developed for the Golf R32. With some adjustments, Audi managed to get the compact 250hp VR6 into the TT, which certainly improved the driving characteristics. In addition, the VR6 was also available in combination with a brand new semi-automatic: the DSG6. Yep, this made the TT the very first Audi to be available with this gearbox! 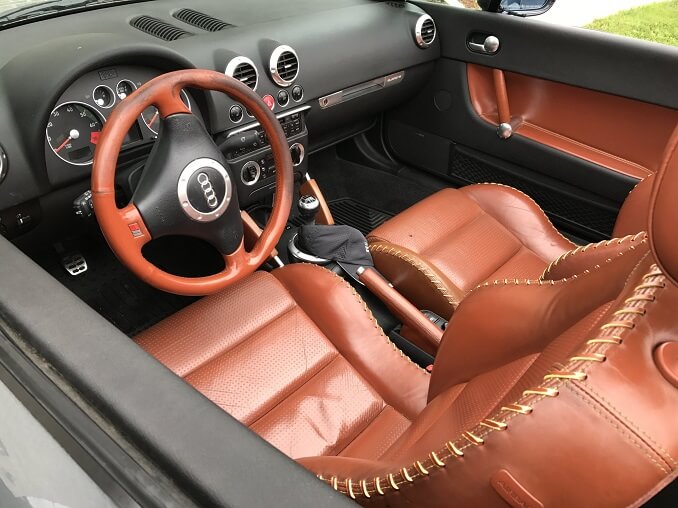 Although the "fast" TT had already been rated a lot better by the critics, this was still not the ultimate iteration of the TT 8N. Such a large engine and automatic gearbox were quite heavy in relation to the car and the torque of the TT was quiet low. That is why they went back to the old trusted 1.8 liter turbo engine. Thanks to two big intercoolers, a modified turbo and dual-mass flywheel, the TT got 15 hp extra compared to the "standard" 1.8 T Quattro. That does not immediately sound very exciting, but by removing the rear seat, among other things, the car lost 75 kilos in weight. In addition, the amount of Newton meters increased from 280 to 320, which resulted in considerable more power. This combined with a modified interior that was finished with soft materials, leather and Alcantara, this was the car that Audi had announced ten years earlier. A real coupe, which not only looked good, but also drives very sporty!

In production for 8 years

However, the "ultimate TT 8N" did not remain available in showrooms for long. To be precise, after about 13 months Audi stopped the first generation of the TT 8N. In April of 2006 Audi released a new generation TT. Despite its illustrious existence, the TT did Audi no harm, because the car was sold no less than 275,339 times. The Porsche Boxster, which was also in the showroom for eight years during the same period, was sold 164,874 times for comparison. The TT has thus earned an important place in the history of the coupé and roadster!