It is impossible to imagine the automotive world without Bosch. Open a random hood and you’ll see the name Bosch on all sorts of electronic components. One of these components would most probably be the ABS unit, since Bosch and ATE are market leaders in ABS systems for modern cars.

Bosch has been building ABS systems since 1978, but it was not until 1993 that ABS became more important. At that time, car manufacturers started looking for ways to make vehicles safer and it was only then that manufacturers started assembling airbags in large quantities. However, it took until 1998 before more than 50% of the newly produced cars were equipped with ABS ECU. During this year, Bosch introduced the Bosch 5.7, which eventually developed into the most successful system ever.

When a product is used in large quantities, many of it will become defective. We’re not saying the Bosch ABS 5.7 is an unreliable product, but it does have its shortcomings. There is not a particular element of the ABS 5.7 that always becomes defective, complaints are highly diverse and sometimes the same for particular car brands. Besides, many complaints are related to the method of assembly in the vehicle. However, details and real-life experiences are way more interesting than such a general story, right? We’ve chosen two:

The Mercedes-Benz ABS unit suffers from an exceptional amount of defects caused by fluid leakages. The main cause being the external filler for the windscreen washer, which is assembled dangerously close next to the ABS unit. We don’t have to explain why so many fluid leakages occur with the ABS 5.7 in this delivery van.

We don’t know why, but the number of wheel sensor complaints with this BMW ECU is above average, while nothing is wrong with the actual sensors. In such cases, we often come across the exact same (and repairable) defects. We strongly suspect that the ECU is subject to temperature fluctuations and vibrations. Truth is, how and where the ABS ECU is assembled can make a huge difference.

These examples show the variety in both the complaints and the car brands. The problem is often partly due to the mounting position in the car. Therefore, do not automatically look for the problem in the ABS unit itself, since there are many factors that influence its functioning.

The list of error codes is simply too long to place here, but we do want to give some more clarity. The ABS system is usually seen as a part of the chassis, which is why these error codes start with ‘’C’’, followed by four numbers. Codes C1000 up to and C1999 are brand-specific and therefore differ from each other, but we frequently come across C10XX and C12XX codes.
BMW has its own error codes, consisting of two characters. For example, error code 34 concerns a wheel sensor and error code 15 has to do with the pump motor. VAG, after all, chooses 5-digit codes that almost always start with a ‘’0’’ or ‘’00’’. 00287 and 00301 (wheel sensor and pump motor) are well known to us.

Finally, we want to stress the importance of investigating the CAN errors. This in order to make sure that the error is not somewhere else in the vehicle and to conclude whether the ABS ECU itself is defective or not. This is because we often receive ECUs that function like they should, without any defects.

At the edge of the circuit board we see various (golden) bond connections that connect the plug to the circuit board. In case of (a) defective bond connection(s), the entire row of bond connections is removed to be replaced by a new one. In contrast to do-it-yourself hobby projects, we do not use soldering techniques. We use specialised equipment that creates new connections through ultrasonic bonding. This increases the quality and reliability of our remanufacturing, being definitely higher than those of hobby-like repairs that we often see. Each type of ABS 5.7 has its own bond program (written by us), to place perfect connections on the right positions. The result: an ABS ECU with stronger and more reliable connections than a new one.

After repairing the connections, the circuit board is provided with a layer of special gel and covered with an in-house developed cover. We ensure a high-quality solution for covering the circuit board: protecting the entire unit against external influences and thus increasing its lifespan.

It is now time to test, probably the best part of the whole process, since we developed and built our own Vision test environment. This setup can in fact simulate the entire car, including the button for deactivating the Electronic Stability Program (ESP). Each wheel’s velocity can be adjusted and all CAN data is displayed in detail. The actions of the brake pedal can also be simulated. What about the error codes? They can be shown and removed without limits. The Vision test-setup gives us and our customer the confidence in remanufacturing that we all deserve, of which we are very proud. 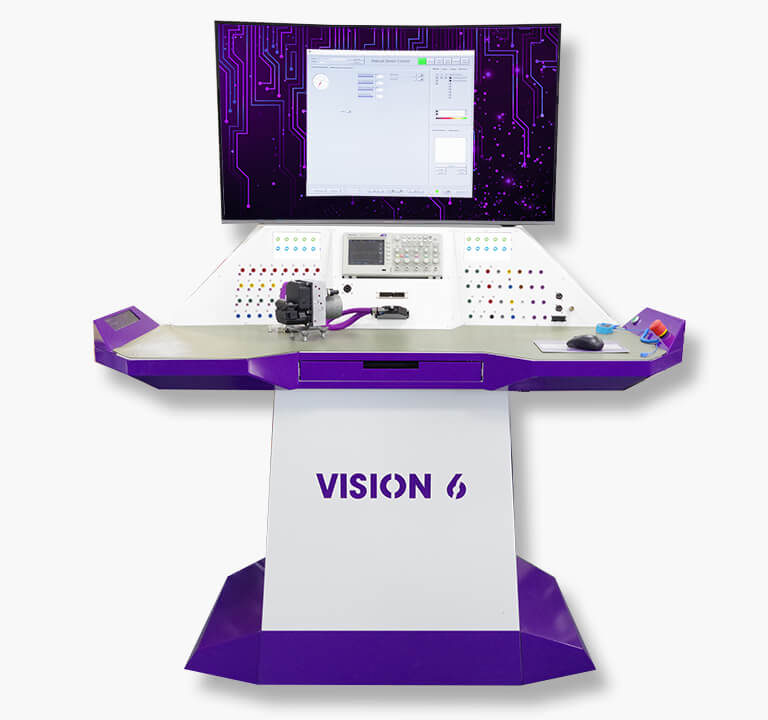 Of course, we come across defects that do not fit into the standard remanufacturing process, but which we can still repair. Even for such cases, we managed to develop qualitative solutions.

The Bosch ABS 5.7 in detail

The ABS 5.7 broadly consists of three parts: the pump motor, the HCU and the ECU. Together they ensure a properly functioning system and they surely cannot operate without each other. We will explain how both function and in that way how the ABS system works. 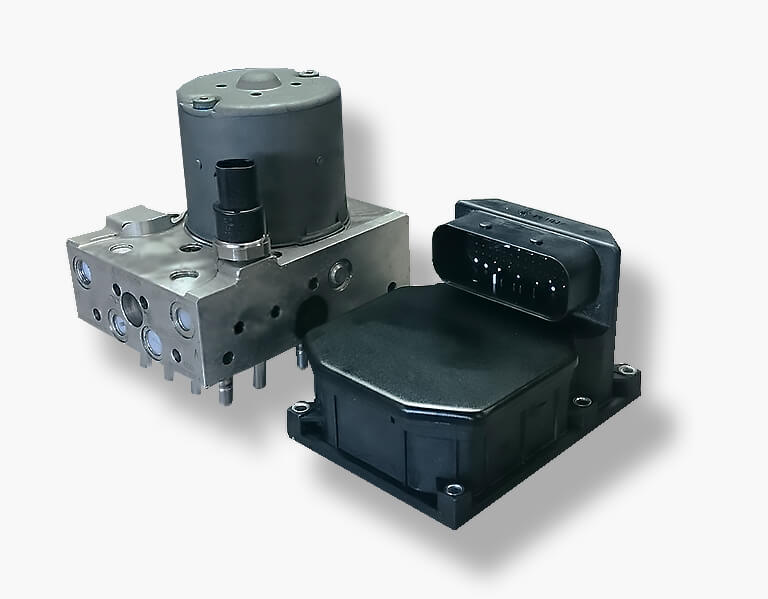 The pump motor does nothing else than keeping the brake system under pressure. ABS is a system that shortly reduces pressure in one or multiple brake calipers which in turn temporarily release their brake disc. Once the pressure must be increased again, the pump motor pressurises the system. This process repeats itself multiple times per second once one or more wheels loose traction: causing the characteristic vibrating sensation in the brake pedal.

HCU stands for Hydraulic Control Unit. It looks like a large massive aluminium block that contains many channels and valves that make sure the ABS does what it is supposed to do. It are these valves that are responsible for opening the outlet ports that release the brake calipers. Luckily, these channels are always closed at rest position. Therefore, you do not have to be afraid of a non-functioning brake system in case of a malfunction. The system is ‘‘fool proof’’: in case of malfunctions, the car feels like an old-fashioned one without ABS: with working brakes.
Zooming in on how the HCU functions, there are 8 particular ‘‘pins’’ that stand out (12 in case of an ABS with ESP). It are these actuator pins that are able to open and close the channels. The coils at the bottom of the ECU hang over these pins during assembly, but once the ECU is energised, the pin is pulled downwards by a strong magnetic field in de coil. This opens a valve, temporarily opening one of the channels with brake fluid. If the voltage drops, the pin will jump back up and its corresponding outlet port will close.

In most cases, a pressure sensor is assembled at the bottom of the HCU. This sensor continuously measures the fluid pressure in the system and is hugely important for the pump motor. The pump motor is not constantly running but only responds to low pressure. Without a properly functioning sensor, the fluid flow cannot remain pressurised.

The ECU is the brain of the unit. It receives inputs from various sensors, including those of the wheel sensors and the above-mentioned pressure sensor. The ECU decides which action needs to be taken and operates the needed actuators, based on the values it receives. So, the ECU controls the HCU and the pump motor. Like we said, the ECU has coils at the bottom. By energising these, the ECU ensures that the actuator pins are pushed down so the brake fluid can drain off.
In the presence of an ESP the ECU has to do some more things. Inputs of the steering angle sensor and yaw angle sensor must be compared with each other to determine whether or not the vehicle makes a realistic angle of rotation. If the car rotates more or less than expected by the value of the steering angle, the result is either understeer or oversteer. ESP can correct both situations, by slightly slowing down one or more wheels in order to obtain the desired angle of rotation (yaw angle) again. The ABS system independently slows down one or more wheels, without touching the brake pedal.

Before starting the disassembly, we recommend disconnecting the battery and only reconnecting it again once the ABS assembly is reassembled. It is also known that in some vehicles the ABS system requires to be re-initialised. Keep this in mind when re-assembling. After disconnecting the connector, first drain the brake fluid before continuing with the actual dismantling, which can vary greatly per type of vehicle. Please refer to the available documentation of the manufacturer.