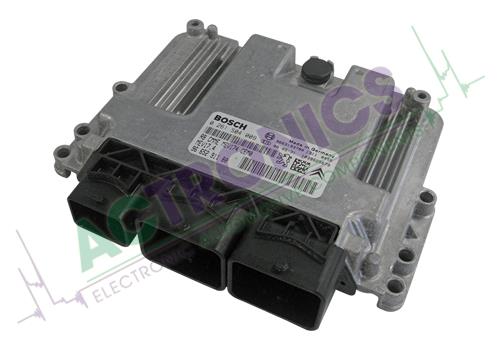 The Bosch MEV 17.4 is an ECU that can be found in various PSA models (Peugeot, Citroën) from 2007 on. The ECU is used for the 1.4 VTI and 1.6 VTI petrol engines without turbo, engine code 8FS and 5FW. Although the unit itself often fails, there are many external causes as well. If the problem is in the ECU itself, we have a repairing solution available.

Ignition problems often indicate a fault in the ECU. Defects with the lambda sensor heating can often attributed to a faulty ECU unit. ACtronics has developed a specific remanufacture solution for this. The combination of error code P1602 and P1030 may indicate gear wear: “variable valve lift shaft pinion”. In this case it is not always the ECU that causes the problem.

The combination of error code P0031, P0037 and P0444 may indicate a defective F19 15 Amp fuse. Lambda sensor bank 1, lambda sensor bank 2 and the fuel tank vent valve have a common power supply. Error code P023B is common with the 1.4 VTI and 1.6 VTI engines. Usually the cause is a faulty crankcase ventilation heater.

Effects on other component on the car

Although a faulty ECU can in theory have a major impact on the operation of other control units in the vehicle, no specific effects are known at this time. Error codes may arise that relate to other components such as the ABS system.

A defective unit can cause faults like the engine not starting, running irregularly, creating insufficient power or illumination of the engine fault light. Continuing to drive with a faulty ECU can result in potential engine damage. Moreover, in many cases the MOT will not be passed due to emissions.

Repair an ECU by ACtronics?

Do you want Bosch MEV 17.4 or another ECU remanufactured? You can quickly and easily submit a remanufacture request on our website. We have an extensive range of ECUs from well-known brands and models like the Valeo J34P or Bosch 8 ESP.

Do you want to have a product remanufactured that is not listed on our website? Please contact our customer service to discuss the possibilities.