The Continuously Variable Transmission (CVT): who does not know it? The basics of the technology of this type of automatic gearboxes were created in the 1950s. The system is still used today in a more modern version. We often see however, that faults appear in the Transmission Control Unit (TCU) of modern CVTs. It would therefore be good to take a closer look at this technique and see what the common defects of the TCUs are. 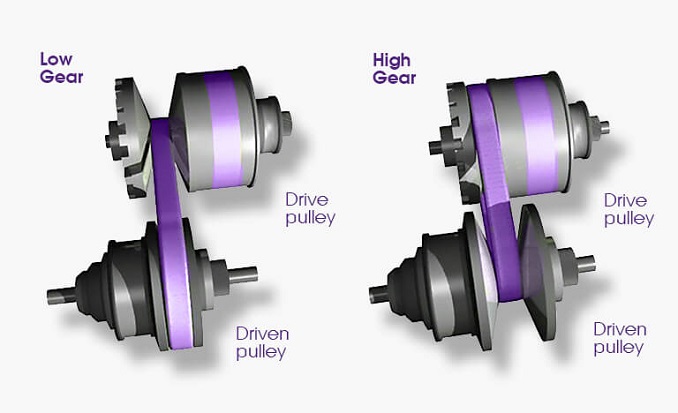 The basics of the CVT transmission

The special feature of the gearbox is the fact that the pulleys can change in size. One pulley is small and the other large when the car is moving away. When the car accelerates, the large pulley becomes smaller and the small pulley bigger, so the gearbox moves though it’s range without any steps. This means that the motor immediately has the optimum speed for a particular situation. The result is a more gradual and more efficient way of driving than in any other automatic gearbox. This generally results in lower fuel consumption.

The original Variomatic system has been used in DAF passenger cars for several years after its introduction. Even after the takeover of DAF by Volvo in 1975, the Variomatic system was used, for example, in the 66, 343, 345 and later the 340, all of which had relatively small engines (up to 1400 cc). The Variomatic was not suitable for transmitting greater engine torque. That is why Van Doorne Transmissie (acquired by Bosch in 1995), as a successor to the Variomatic system, developed the push belt CVT, which uses a steel belt with numerous steel links that are connected to two sets of steel strings. This construction is clamped between the discs to transmit the torque. The force is then transferred to the steel links, causing them to "push". This is in contrast to the Variomatic system, that used a pull belt.

What does the driver notice from the CVT transmission?

First of all, there is acceleration. Where you often notice a real 'power boost' with other automatic gearboxes, it is different with a CVT gearbox. When the accelerator is fully depressed, the car will gradually accelerate, as mentioned.

Another noticeable difference is the noise produced by the CVT and the engine when accelerating. When you accelerate, the engine immediately jumps to a speed where it then remains during acceleration. This sound is quite similar to the sound produced by a slipping clutch, which can make the sound appear unnatural.

The basics of the CVT gearbox have actually stayed the same over the years. There have been evolutions (such as the push belt CVT) and in addition, for example TCUs (Transmission Control Units) have made their appearance in the automatic gearboxes. These TCUs are actually the brain of the gearbox that measures variables like input speed, output speed, clutch pressure and fluid temperature and then controls accordingly. Determining the amount of oil that goes to the pulleys through the valves in order to adjust the gear ratio is, for example, a task that a TCU can perform. Subsequently, a defect in the electronics can cause quite a few problems. We see that the TCU often causes problems with two gearboxes. 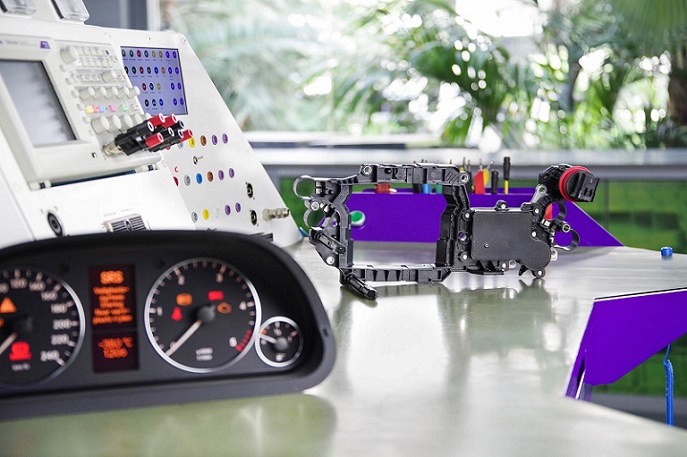 Mercedes has developed a CVT transmission for their A-Class (W169) and B-Class (W245). The Mercedes CVT uses a torque converter and is also known as the 722.8 gearbox. Despite the fact that the CVT technology has been serving its purpose for many years, we see that over time, problems can develop with this Mercedes gearbox. Inadequate maintenance by not changing the oil periodically, temperature influences and vibrations are, for example, reasons that for the unit to fault. That is why we have a specific remanufacture solution for the TCU of the 722.8 Mercedes CVT that can, for example, rectify defects on the gearshift position sensor, speed sensor and various error codes.

Another infamous variation on the CVT automatic transmission is that of Audi: the Multitronic. This continuously variable transmission was used by Audi between 1999 and 2014 in the front-wheel drive versions of, for example, the A4, A6 and A8. Unlike conventional modern gearboxes that use a push belt with metal links, the Multitronic uses a chain. Audi's variant on the CVT, however, often produces strange cures while driving. For example, reverse gear works poorly when the temperature is low outside. Only after having pressed the accelerator a few times in neutral does the "R" is it possible to put the car in reverse. 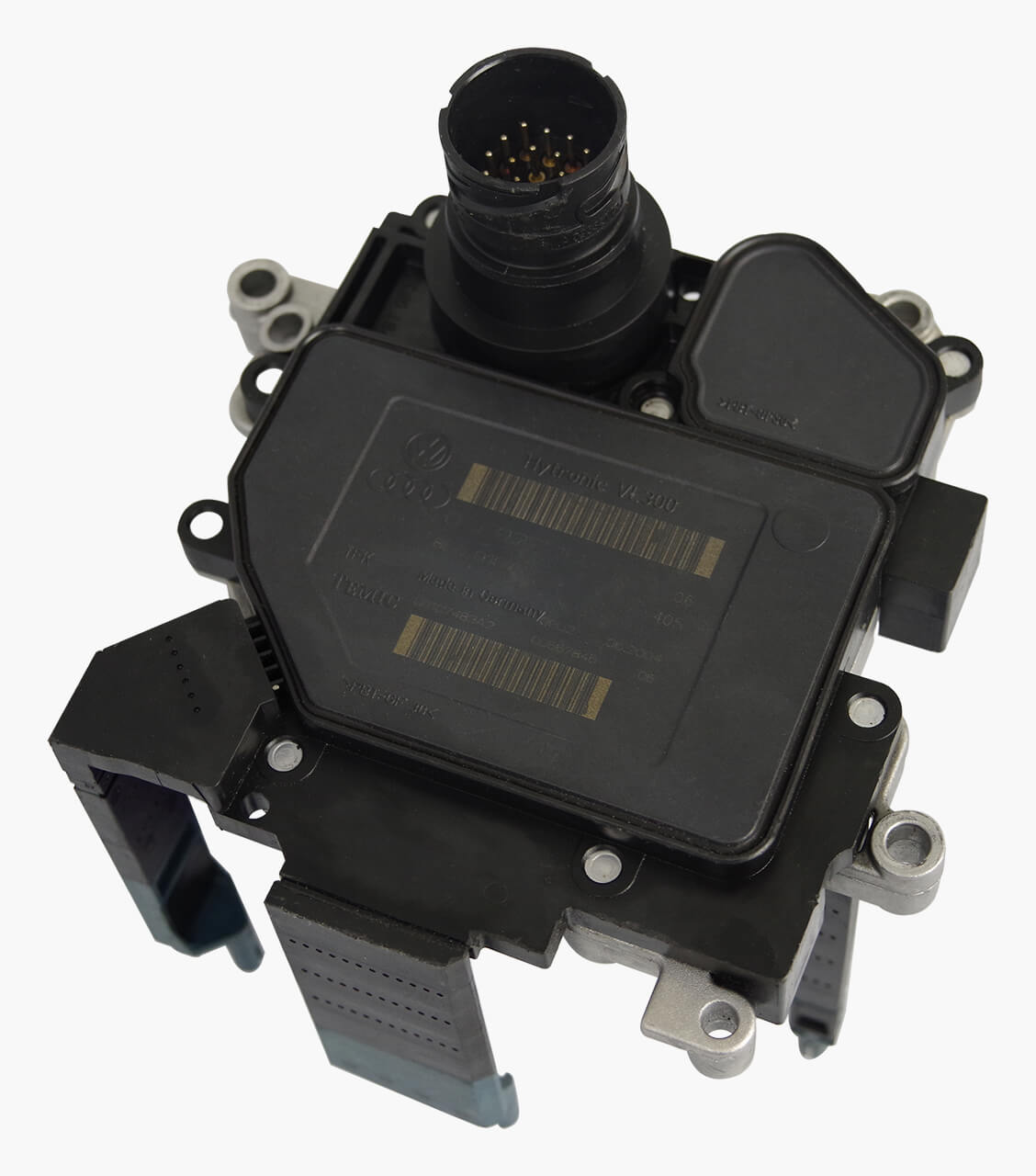 In addition to this inconvenience, the system also appears to be maintenance-intensive. That is why, as with the 722.8, we have also developed a special remanufacture solution for the TCU of the Multitronic. Problems that may be related to the TCU are: car does not shift into 'R', car does not start, automatic transmission shifts poorly and continuous 'F' on display. Various error codes such as P0722 and P0730 can also relate to this system.

It can be concluded that the CVT automatic gearbox has proven its service for years and will continue to do so for many to come. The technology saves fuel due to the optimal transmission ratio and the technology is (in principle) reliable as well. It is therefore not surprising that the CVT is now also used in various hybrid and electric vehicles. The ECVT as it is called, is used in the Lexus CT200h and the Toyota Prius, amongst many other models. Bosch is also busy with the development of an updated version of the CVT push belt.