Strong and weak points: the modern ECU in detail

The ECU is a wonderful piece of electronics. It is difficult enough to have so much functionality in such a small housing, but to make it function accurate and reliable in a surrounding that is ever changing is a formidable achievement. Though… the mentioned reliability is not always as good as it should be. How is it possible that the ECU, from time to time, does fault?

It is probably better if we start with an explanation of the technology that we find in the ECU, to be able to understand what weak points can be found. Nearly everybody knows that the ECU consists of a processor and memory soldered on to a PCB.

The PCB itself: the well-known green circuit board made of glass and epoxy is still widely used (ECUs by Bosch, FoMoCo and Siemens/VDO), but the introduction of ceramic material has made many manufacturers switch. The ceramic PCB is better in dissipating heat an is made of a finer, better structured material so it can be produced with great accuracy. This has it advantages for the design of the PCB because it is possible to create very small and even complex 3D structures. Car manufacturers like to use these advantages because every form of weight or space saving is welcomed. We expected to see these new ceramic PCBs more often in the near future.

Ceramic PCBs are nearly always glued to an aluminium base-plate with a thermal compound. This does not only help to dissipate the heat (created by the components) more quickly but also strengthens the PCB. Distortion and vibration caused damage of the PCBs is therefore less often noticed. Cracks and splits in the board itself are rarely seen either. The use of the ceramic boards has some real advantages over the trusty old green PCBs. We dare to go as far as saying that the old type PCBs are partially to blame for the varying reliability of some of the ECUs.

Components in and on the PCB

It won’t be a surprise to hear that this new type of PCBs uses different components. A conventional PCB is built coarser than the ceramic counterpart which makes the components themselves more robust. Most contacts are big enough to be seen with the naked eye. You would imagine that these components are more reliable than the smaller more fragile component on the ceramic PCB, but strangely enough the opposite seems to be true. Even larger modern components still fault. Could the low manufacturing costs play their part?

Using the right (solder-)equipment and skill a lot is possible in remanufacturing the connections and components on these often green PCBs. Even if the contacts are located on the bottom of the component as is the case in BGA processors. Though special equipment has to be used that can heat a specific local area.

A conventional PCB and the related components do fault from time to time, but remanufacture is in many cases a possibility. With components on ceramic circuit boards this process is not that straight forward.

Because of the size and complexity of the circuit board it is necessary to use smaller components. Heat dissipation is in the ceramic boards not a problem, even if embedded components are used. But when these delicate electronics fault, repair is not easy. Components are difficult, nearly impossible to reach and damage is easily done. The connections are often so small that it would not be possible to repair them without microscopes and specialised equipment. It would not impossible, but in every case, it should be evaluated if it is economically viable to repair the component. 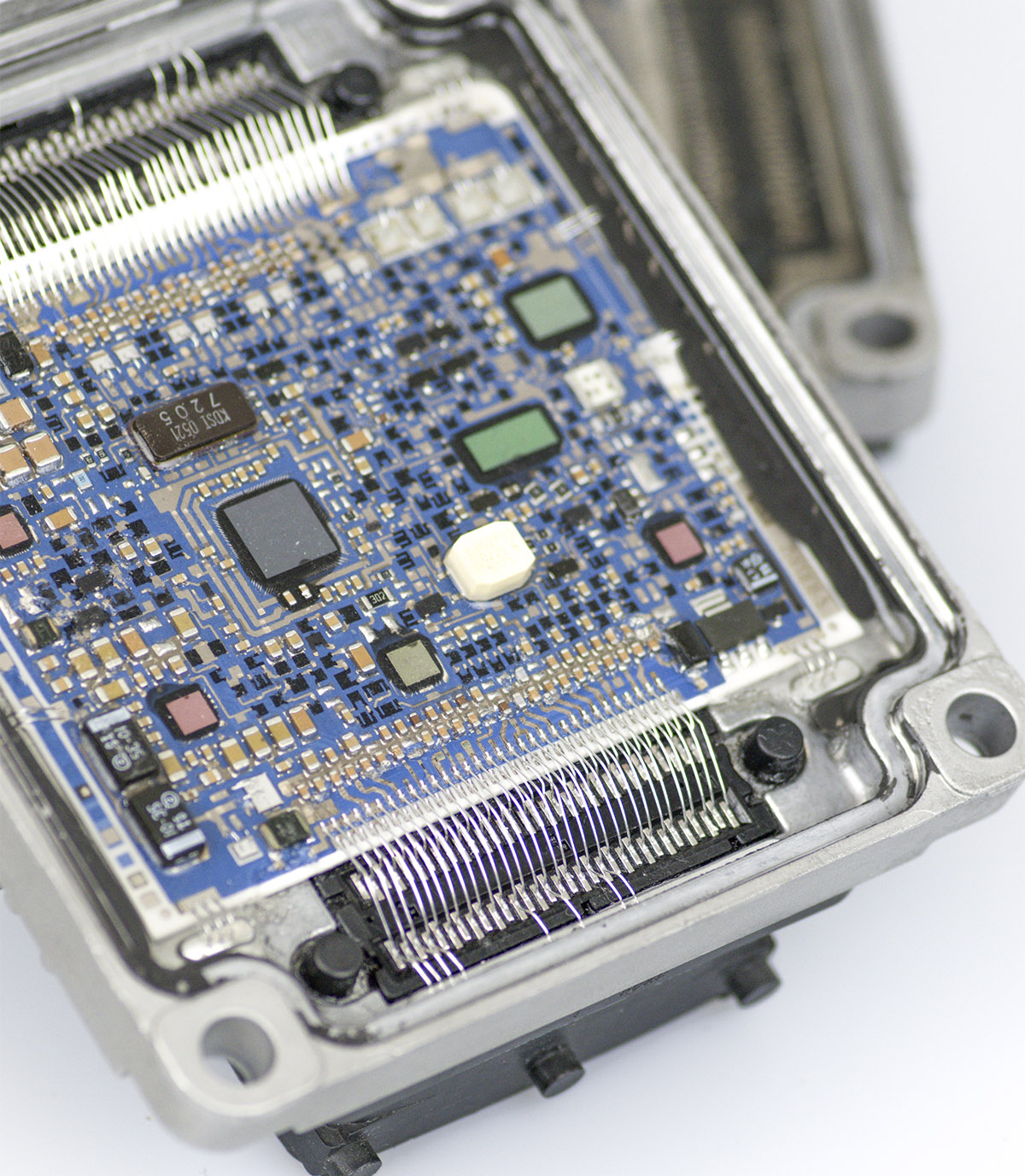 About connections: because of the compact and complex design of the ceramic PCB, wire connections are often preferred over printed connections. These wires can microscopically small. The wires shown in the picture from the PCB to the connector are visible, but the hundreds of gold wires that connect the square purple component in the middle of the PCB are only 50 microns thick and therefore hardly visible with the naked eye.

These gold wires are a good example of showing why they should not be touched; the chances are they will be moved and short-circuited.

We will be honest; these wire connections are the Achilles heel of the ECU that uses ceramic PCBs. The wires do not handle vibrations and heat very well, things that can be caused by a current spike. Often the PCB is covered with a layer of silicone gel, that will protect it from vibrations and variable temperatures. Having said this, we still find a fair number of ECUs with faulty wire connections. How is that possible?

This is not so much the ECU itself as the place where car manufacturers place them. On top of the inlet manifold is, for example, not the best place for a sophisticated part like an ECU. Still in certain cars this really is where it is located!

Contra dictionary to the components, the wire connections on a ceramic board are normally repairable if you have the right, often expensive, equipment and use the correct procedure. It is not possible to solder the thin aluminium wires to the gold contacts, even if there would be space for this. But if soldering is not possible, then how would it be possible to connect these wires to the contacts?

The solution for this is an ultrasonic bonding machine, as used by ACtronics. As the name may suggest, ultrasonic vibrations, at a frequency of 60hz, are used to flow the two metals (contact surface and wire) in to each other. Without going in to too much detail, we can reveal that this way of bonding can be done quickly, accurately and without the use of any heat source. This technique is really useful around delicate components. The created bond is very strong, the result is comparable to a weld. This is why car manufacturers are using the same type of bonding.

The introduction of ceramic materials is welcomed by the ECU, because of the disadvantages of the old green PCB. Components seem to last longer because of the heat dissipation, stronger bonds that suffer less from deformation and vibration and a smaller, lighter and more complex design. There is one major disadvantage though, the wire connections. The ECU itself is not always the cause of the faults in these connections but we cannot deny that this is a weak point.