Teasing you with the TCU

The trickle-down effect is a wonderful thing. Wealth through the generations and all that. It works really well in the automotive sector in the long term. New tech gets fitted on eye-wateringly expensive top end Mercedes-Benz and BMW models. A few years later it’s on the more mainstream models they produce. A few years after that your mum is telling you about this thing on her mass market city-runaround that’s made driving so much easier.

Of course a lot of it will be vehicle elements that most drivers will never be aware of- which is usually the point. That’s all fine when it’s working well. But when technology is applied on the lower end of a premium brand’s output- the prices for repairs don’t drop to cover the lack of three-box format for the car in question. What do you do when something particularly fundamental goes wrong?

Take the transmission. If something as central to the vehicle’s function is not working properly, it can be a major headache. Particularly if it is something not really intended to able to be repaired in a garage. This is the downside of the trickle down effect. So what delights are the premium manufacturers preparing for you to uncover? Take Mercedes-Benz. “When you say Mercedes-Benz, most people think German reliability and luxury” says Kevin Barnbrook, marketing manager at vehicle electronics remanufacturing and repair specialists ACtronics. “It’s the same regardless of whether it’s the bigger C or E Class or the smaller models in their range such as the A Class and B Class. “The smaller models come with the same plush extras as the bigger models have, but they also come with automatic transmission to make sure that the car drives as smoothly as its larger counterparts. “Both the A and B class come with a 722.8 Continuously Variable Transmission (CVT) unit with torque converter, simply because it functions relatively comfortably and requires little space to be fitted, which makes it ideal for these smaller models.”

If you believe that the combination of mechanical components and electronics is an unholy alliance that should never have been suggested – then look away now, because you won’t like where this is going.
The management of this CVT with torque converter is conducted by mechatronics. This is a mixture of mechanics and electronics. To the uninitiated it might appear to be just a warren of channels and valves, but these control various other components. We said you wouldn’t like it. Central to this is the transmission control unit (TCU). “This TCU is basically what controls the electronic automatic transmission or gearing in all modern automatic Mercedes-Benz A and B Class vehicles since the change over from hydro mechanical controls,” explains Kevin. “What the TCU does is uses sensors and data provided by the ECU to calculate when to change gears. This provides optimum performance and much better fuel quality for the vehicle. It’s essentially the brain of the automatic gearbox.”

“When the TCU goes faulty, there are a whole host of codes that relate to faults within the TCU. The most common ones we see are P0720, P0722, P0793 and P0794, which relate to either the output speed sensor or shaft speed sensor.” There’s nothing more unsettling than fault codes that prompt more questions than answers – and this is clearly something you don’t want to try fixing yourself. “These can sometimes be a tricky repair,” says Kevin, due to the small nature of the circuits, processors and soldering needed to replace and remanufacture.” “Specialist tools are needed for the smaller components found on the PCB on the unit. These sensors could be the cause for multiple error codes or faults when idling, which could then relate to them Speed Sensors as mentioned.”

Help is available fortunately. ACtronics provide TCU remanufacturing services. Explaining their procedures, Kevin says:
“When we receive the TCU, we will always test the unit on one of our bespoke test rigs that have been specially developed to enable us to fully test the unit, like it would on a vehicle to see if we can trigger the faults. Once the fault codes have been seen, remanufacture work is then carried out on the unit and then re-tested to ensure that it is fully working.” 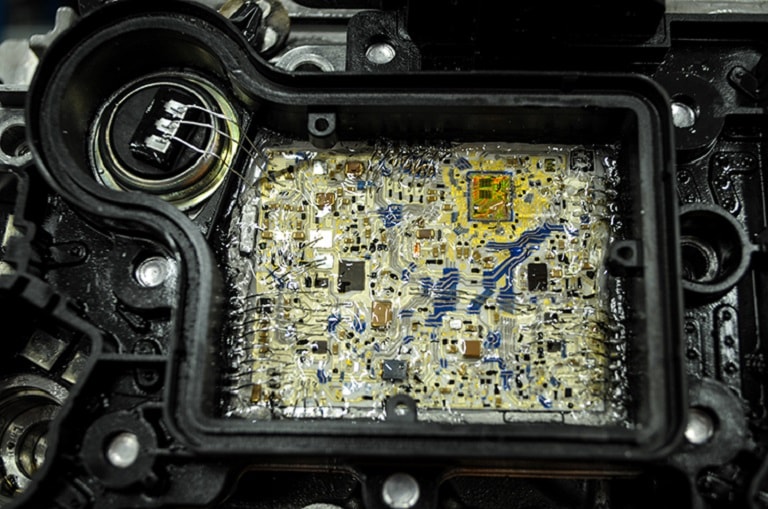