The logic behind the VAG OE numbers unraveled

When registering a remanufacturing order, we always ask for the OE number: a number that each part of the car has. "OE" stands for "Original Equipment" or an original part. This number is unique for a certain production series. At first, these seem fairly random numbers, but appearances are deceptive. Especially in the Volkswagen Group (VAG) there is a very strong logic in the system, which was developed by Ferdinand Porsche in the 1930s. In this article we will analyze the logic behind these OE numbers.

An OE number with the VAG brands always consists of at least nine characters. Within this manufacturer number, there are then several groups or sets of numbers and letters that have their own meaning. The combination of these different numbers and letters then indicates the exact part. The structure of the code system can be seen below. The first nine characters are mandatory, the characters after that are optional depending on the component.

Set 1: Engine / Model to which the part applies to

The first three numbers represent the car or engine to which the part applies. An overview of a number of common numbers that relate to a certain model can be found below.

In some cases it can therefore also occur that the first three characters relate to a specific engine. An example of this is 06C. This code indicates the 3.0L V6 engine from Audi, while 077 stands for the V8 block from a Volkswagen Touareg.

Set 2: The main domain and sub-domain

For many of the VAG components that ACtronics are remanufacturing, the first number in this series will therefore be a "9". The second and third numbers in this series indicate the sub-domain of the part group. For example, "20" indicates an instrument cluster. An OE number starting with "5K0 920" is therefore an instrument panel of a Volkswagen Golf VI. 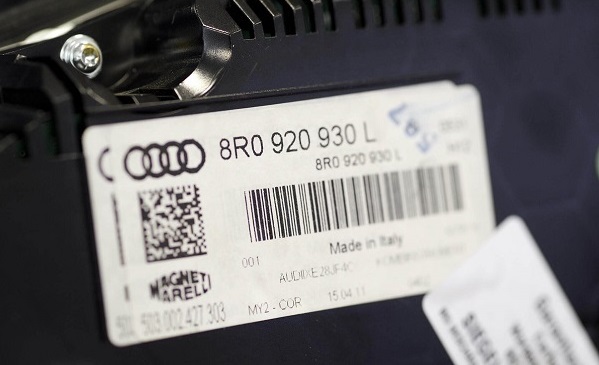 The third set of three numbers indicates the exact part. This is therefore the identification of the specific version of the part. This is always a combination of three digits. For example, 960 can be a specific part number in line with Volkswagen Golf VI instrument clusters.

In some cases the part number is closed with a code consisting of 3 letters and / or numbers. This indicates a specific color in which the part may have been executed. For example, Q70 indicates a light beige part, U71 a flannel gray and B41 a black one.

A VAG component always consists of at least 9 characters (set 1, 2 and 3), but it can go up to 14 characters due to various modifications or colors.

It is probably now clear why we ask for the OE number on the remanufacture order form and not rely on the other part numbers: this number indicates with absolute certainty and with great detail the defective part. This is very important information for us, because every OE number has certain features that influence the remanufacturing process. A small footnote: we must admit that not every car manufacturer works in such a structured way with OE numbers as the VAG group does, so do not always expect such a logic in the OE numbers. Many different variations are known in the structure of the OE number.

Do you still have questions about the OE number of your component as a result of this article? Feel free to contact us!