The Bosch ABS 8.0 is a logical and worthy successor of the well-known ABS 5.7 which is being used since 1998. Bosch made a good attempt to improve and modernise the system at all levels and it won’t surprise you that the ABS (ESP) 8.0 became faster, more extensive and lighter. Moreover, the system of this new generation also became useable for motorcycles, so we might safely call that a revolution. 40% of the accidents seem to be caused by skidding and the ESP-version of the Bosch 8 seems to prevent 80% of such situations. Not all bad, right?

But have all weaknesses been ?ltered out? Unfortunately not. New techniques that enable the system to become smaller and lighter also cause defects. Although the whole system was comprehensively tested before it entered the market, it is not possible to simulate every situation. Also the Bosch 8.0 ABS and Bosch 8.0 ESP de?nitely have their shortcomings. 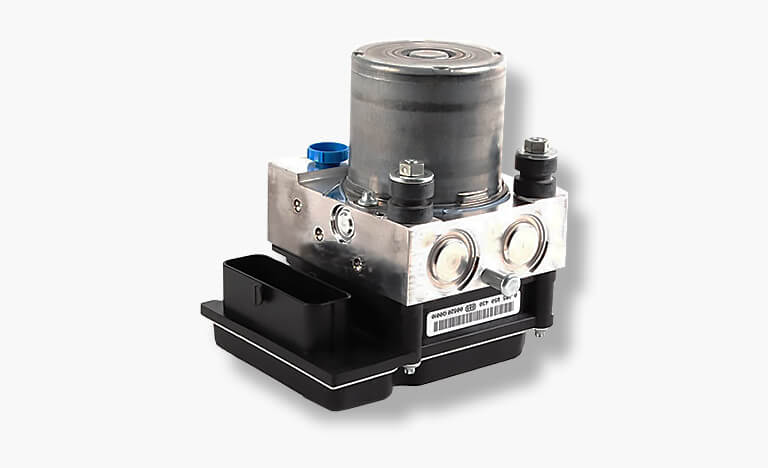 Let’s start with the pressure sensor that is assembled in the Hydraulic Control Unit (HCU), because errors regarding this pressure sensor occur relatively often. Remarkably, this is often observed at Volkswagen AG cars (Audi, Seat, Skoda, VW). There are several causes for these errors: in some cases it is the pressure sensor itself. In others, the hybrid connections in the ABS broke down. Fortunately, ACtronics has a reliable and accurate method for replacing these hybrid connections: ultrasonic bonding. Interested in how this works? Take a look at one of our videos on YouTube. 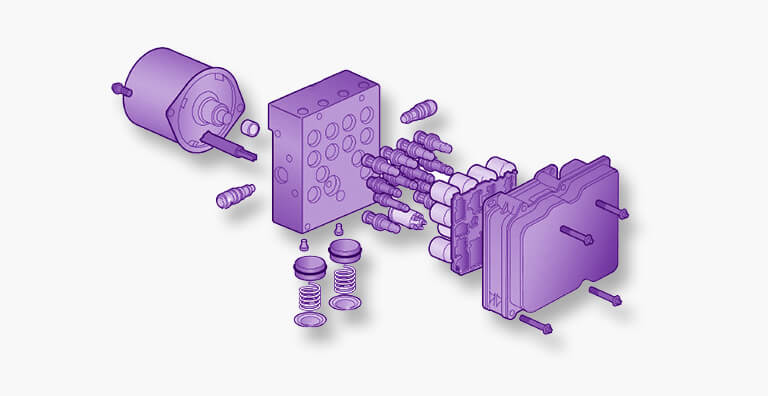 Although it is quite exceptional that the pump motor of a system goes defective, we still want to point this one out. After reading out the ABS system it is often clear that there is something wrong with the pump motor, the display will show “C1381 = ABS/ASR recirculation pump, electrical fault” when reading out a Peugeot or Citroën with defective pump motors. But also with Fiat, Ford, Nissan, Vauxhall, Seat, Skoda and Volkswagen we see these complaints. Even with ESP-versions that are assembled among others in Audi, BMW,
Mercedes-Benz and Toyota, defective pump motors occur. Unfortunately, replacing the pump motor will not solve the problem because in almost all cases there is consequential damage on the circuit board of the ABS ECU: components burn out because of the stuck pump motor. Therefore, recovery of the ABS ECU is necessary.

Another exceptional, but interesting thing: control of the coils around the solenoid valves (valves in the HCU) can fail. “C1385 = Solenoid valves supply voltage fault” will show up with certain car brands and it indicates quite clearly what the problem is. ‘Voltage fault’ can be interpreted literally, because exactly 0.0 voltage is reaching the coils of the solenoid valves. A big, square-shaped relay will not be found in the modern Bosch ABS 8.0, but in this case the smaller modern version of that does not function. However, the coils themselves might also be defective. This is why we always check them in case of such disturbances. 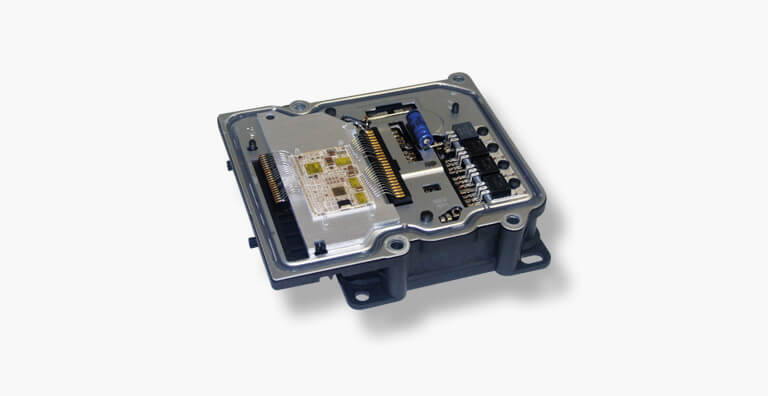 In many cases, the ABS-unit itself does not become completely defective. More than 30% of all the components sent to ACtronics for remanufacturing do not seem to be defective at all. The Bosch 8 is no exception. Often, it is only afterwards that something seems to be wrong with the wheel sensors, the magnetic rings, the plug of the ABS ECU, the fuses or other external factors. The Bosch 8 itself turns out to be quite reliable in practice. So don’t be suspicious of the ABS-unit in the ?rst place, but know that all other components have been comprehensively tested.

The ABS ECU is opened by milling, to check the circuit board. This is followed by an entry test in our Vision 6 test environment. The remanufacturing process depends on the observed complaint at the entry test.
In case of a defective pump motor, the pump motor, hydraulic unit and ABS ECU will ?rst be separated. This must be done very carefully because the hydraulic unit is made of aluminium and can therefore be easily damaged. After this the pump motor is remanufactured at our Mechatronic department, or we exchange it with a remanufactured unit from our own stock. The ABS ECU goes through a different process. After comprehensive measurements and checking for defects, all weak parts (so not only the defective parts) are replaced. This extra step shows the difference between repair and remanufacturing: we don’t just repair the defect, but return a unit to the costumer that has been improved on all levels. The ABS ECU uses a ceramic circuit board, with fragile and small components. Therefore our employees are specially trained to successfully perform such operations.

In case of defects around the solenoid valves, the above-mentioned process is followed. However, when errors regarding the pressure sensor are observed, there is a switch to the Bond department. This department is specialized in ultrasonic bonding and ensures that the hybrid connections are replaced. Where possible, more or thicker (than the original) connections are constructed.

Lastly, it is time to test. Perhaps the best part of the whole process, because the before mentioned Vision 6 test environment was completely developed and built by ourselves. The test environment can simulate the complete car, including the button to switch on the ESP. Each wheels’ velocity can be adjusted and all the CAN-data is visible with details. Also movements of the brake pedal can be simulated. And the error codes? They can be read out unlimitedly and easily removed. The Vision 6 adds many extra test capabilities we are sincerely proud of.

Of course, we encounter a lot of other defects that don’t ?t in this standard remanufacturing process, though we are able to repair. We have developed qualitative solutions for such cases.

The 8.0 operates largely identical to the older 5.7. Therefore we choose a different approach for this chapter: we don’t describe the ABS-unit, but the functioning of the DSC-sensor and the steering angle sensor, both of great importance for a well-functioning ESP. In case you might still be interested in how an ABS-system works, read the text about the Bosch ABS 5.7 on www.actronics.co.uk.

Bosch developed their own DSC-sensor for ESP (DSC stands for Dynamic Stability Control), often installed under the driver’s seat. The DSC-sensor contains two acceleration sensors: one lengthwise and one crosswise. Both acceleration sensors use piëzo-electrical material that releases more voltage, as the acceleration power increases. A sprung mass is placed in the middle of the piëzo-electrical material. Once the car is accelerating in a certain direction, the mass will do the same. The power needed to take this mass out of its neutral position, generates a certain voltage in the piezo-electrical material. It is probably unnecessary to explain that the voltage increases as the mass makes larger movements. This voltage is transformed into an electrical signal. The size of the yawing angle can be calculated using the values of the lateral acceleration and the transverse acceleration. 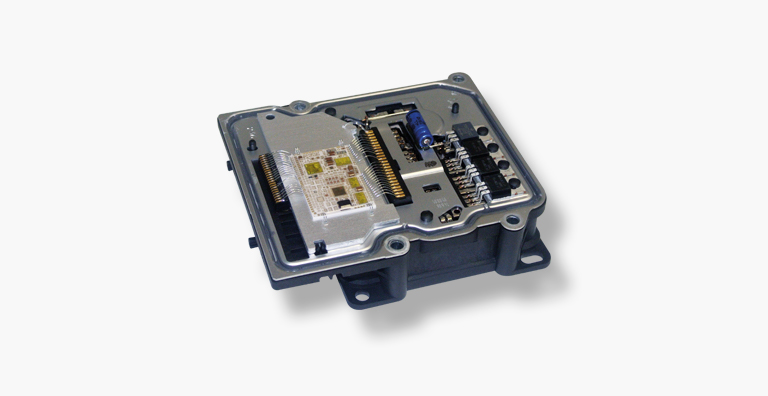 The steering angle sensor is assembled right where you would expect it, around the steering column. The sensor is structured in two potentiometers, also called voltage dividers. The voltage dividers use a ?xed resistive element often made of carbon, conducting the voltage. A sliding contact moves along the resistive element and its position determines the amount of voltage.

In this case, the second potentiometer is not intended to be a control tool, but to determine the direction of rotation: clockwise or counterclockwise. By positioning the potentiometers opposite to each other, the rotational direction of the steering wheel can be determined by measuring the differences in voltage. 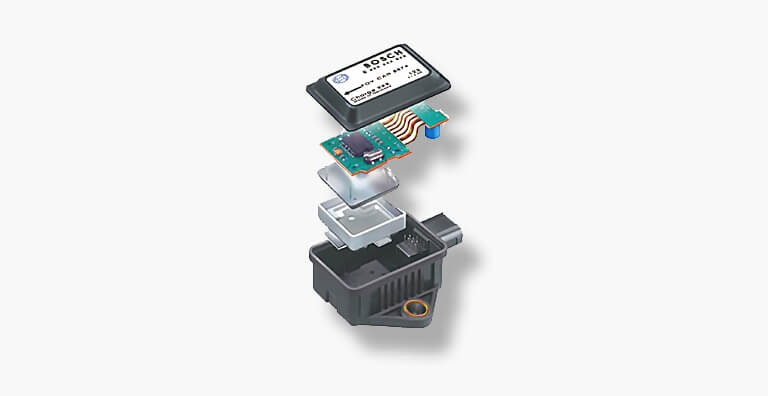 The steering angle sensor is not only used to control the ESP, but also controls electrical power steering. An electric motor augments the steering when needed, therefore the hydraulic power steering is no longer needed. The system not only saves space and weight, but also enables con?guration options for steering. Therefore, a comfortable or sporty feel can be created. The disadvantage is the lack of really feeling the car: because the electric motor controls movements, the way the wheels respond to the road is barely passed on to the steering wheel.

Some extra information about the DSC-sensor and steering angle sensor might of course be very interesting, but we still want to tell you something about the ABS ECU itself. We think that mechanics and diagnosis specialists reading this are mostly interested in the pin assignment of the Bosch 8. Unfortunately, we have to disappoint you a little bit: there is a large variety in units with a large plug, all with different pin assignments. Therefore we refer to the electrical schematics of every speci?c car. 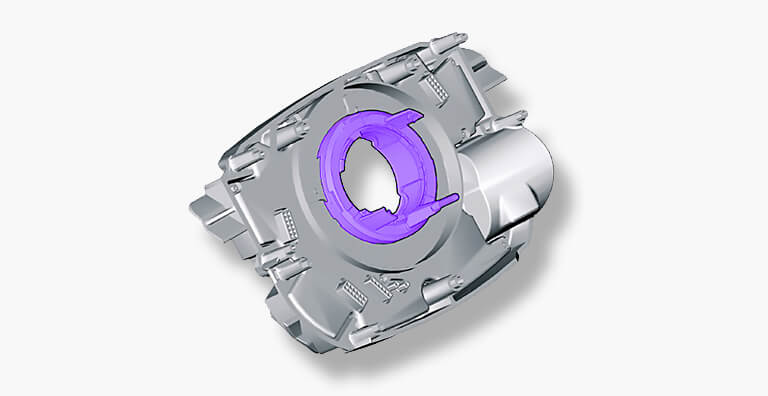 Luckily, it is way easier for the ABS-units with small plugs (the Bosch 8 small pin):

For complaints regarding supply voltage and mass this is easy to check.