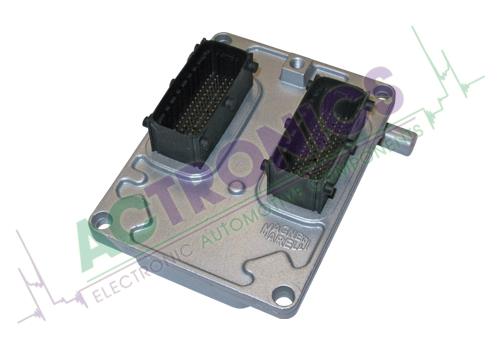 The Magneti Marelli IAW 5NF ECU can be found in several Fiat models. Consider, for example, the Panda, Punto and Stilo. Is the engine management light on the dashboard illuminated? There will be a fair chance the ECU is defective. The IAW 5NF itself unfortunately often faults, but there are defects with that have different causes. Consider faults related to ignition. If the fault is present in the ECU, we can cure it in many cases.

Possible faults and error codes with the IAW 5NF

The faults that occur with a defective IAW 5NF are very diverse. For example, the car key may no longer be recognized: in that case the problem lies in the part of the ECU that controls the immobilizer. But it could also be that faults related to ignition or injection are present. These functions are also controlled by the ECU and can therefore indicate a faulty ECU. What we often notice is the fault about a blinking engine failure warning light, often accompanied by the warning "Engine Fault" in the centre display. These might be error codes that indicate a faulty electrically controlled throttle valve. Even though the throttle appears to be the problem, it is really the control of the ECU that is causing the malfunction. For your convenience, we have collected the error codes that could appear with the aforementioned faults:

As just mentioned, faults that seem to indicate a faulty IAW 5NF ECU can have other causes as well. A good example of this is a fault related to the ignition. In these cases we recommend checking all ignition coils very carefully. Especially the Fiat Stilo 1.6 16v it is known for ignition coils that can fault. Since these can be intermittent faults, it can be difficult to make a good diagnosis. Please ensure to take your time to do this before sending the part to us. We then know what to look for when we test the unit. So we will be able to remanufacture and return your unit.

Remanufacture solution for the Magneti Marelli IAW 5NF B

Before a component is actually remanufactured, an entry test is performed. We do this to determine if the problems we can test for the faults specified on the order form. Depending on the outcome of this test and the faults found in the ECU, a remanufacture will be carried out by one of our specialists. During this remanufacture, all known weak parts are preventively replaced with new components. After our remanufacture specialist has carried out the remanufacture, an end-of-line test will be performed to see if the defects have actually been resolved and the unit is operating as it is supposed to.

Remanufacture an ECU at ACtronics?

Would you like to have a Magneti Marelli IAW 5NF or another ECU remanufactured? You can submit a revision request quickly and easily on our website. ACtronics has an extensive range of units from well-known brands and models such as the Valeo J34P and the Simtec 71 series.
Would you like to have a product remanufactured that cannot be found on the website? Please contact us to discuss the possibilities.