Faulty ABS unit? These are the most common causes and complaints

Cars with ABS units have been around since the 70s. Partly thanks to the mandatory requirement for ABS units in new vehicles in 2004 by the European Union, the number of ABS units has risen sharply. In fact, more than 300 million ABS systems have now been produced.

Defects to the ABS system can often be recognized by the warning light or in some cases an ABS unit to suddenly come into operation. But what are the common problems and complaints of defective units coming in? You can read that in this article!

Causes of a defective ABS system

Before we look at the complaints, we will first discuss the common causes of a defective ABS. Defects to an ABS unit can have various causes. A well-known cause for faulty ABS units we often see coming back are vibrations, causing certain components to come loose. An example of this is, for example, the bonding wires that come loose from the circuit board of the ABS ECU. A second cause is a short circuit in the wiring. The cable harnesses that are mounted in the car move constantly, for example due to poor road surfaces. This creates friction between the cables. Due to this friction, the sleeves wear around the cables, which means that the cables to the ABS unit might get a short circuit. In addition, it occasionally happens that a cable causes a short circuit due to overheating. 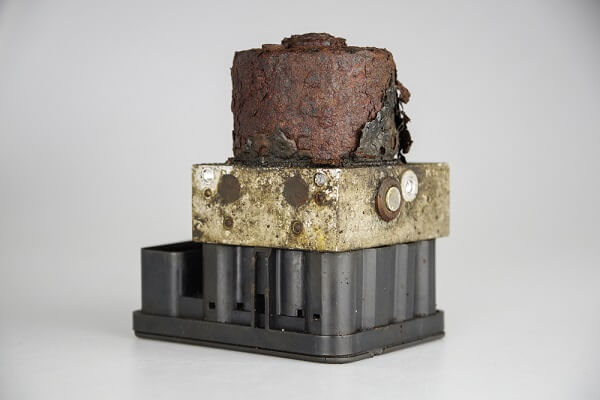 The third cause that is obviously disastrous for the operation of the ABS unit is moisture. Exposing ABS units to rain and snow over time can cause the unit to stop working. This is especially the case with cars where the ABS is not mounted in a "protected" manner. An example of this is the Renault Espace IV. With this car, the unit is mounted directly behind the front bumper.

Complaints of a defective ABS

Now that the common causes of the defects are known, it is now time to look at the complaints that cause them. One of these complaints is the fact that the ABS pump motor fails. This is caused by wear on the moving parts in the pump motor itself, which means that the ABS works inconsistently. Communication complaints is a second common problem. The ABS can no longer distribute messages via the CAN network and can therefore not be read via diagnostics software. This problem occurs with many different ABS units, such as the ATE MK20 and Bosch 5.7.

Finally, we often see that errors on pressure and wheel sensors are detected. An ABS unit that often has to deal with this complaint is the ATE MK60. The miniscule connecting wires that are mounted on the unit can break due to temperature changes and vibrations.

Remanufacturing of the ABS system

with a lit ABS dashboard light can not only be dangerous, but in some cases this can also cause the car to be failed during the MOT inspection. This is the case with cars with a first authorization (DET) after 31-12-2017. Remanufacturing of the ABS units might be a solution to solve the problem. ACtronics has a remanufacturing solution for more than 2500 ABS units. You can use our product finder on our website to find your specific ABS system. Feel free to contact us for more information about our products. Please note: we only work with car companies and garages. Are you a private individual, but still want to use a remanufacturing solution? Then we would like to get you in touch with your local garage. Read more here if you are a private individual.