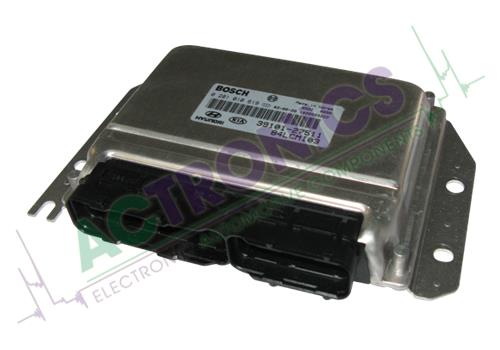 Diesel technology has become less and less popular, but not so long ago, just about all of Europe was driving a diesel-powered car. Driving on diesel was relatively cheap and diesel engines lasted a very long time. Bosch has always been the undisputed number one in the field of diesel ECUs. The Bosch EDC series is therefore well-known. In this article we will take a closer look at the Bosch EDC15C7. How exactly does this diesel ECU work?

The Bosch EDC15C7 in detail

The Bosch EDC15C7 can be found in various models of Fiat, Alfa Romeo, Peugeot, Citroën, Hyundai and Kia. The ECU is suitable for engines with 4 and 5 cylinders. For example the 1.9 JTD and 2.4 JTD engines of the Fiat group. The letters 'EDC' stand for 'Electronic Diesel Control'. The later 'C' in the type designation stands for 'Common Rail'. This type of ECU is therefore capable of controlling engines that use Common Rail technology: A system in which the fuel is evenly distributed among the injectors via a central supply rail.

The ECU consists of a multi-layer printed circuit board (PCB) containing a large number of SMD components. Apart from the central processor (the CPU) there is also a flash memory, an SRAM memory, an EEPROM and a number of input/outputs (I/O). Nice detail: the injectors are opened by the ECU with a high voltage of 80V, this is designed to make the injector open faster.

The Bosch EDC15 C7 is a well-known ECU at ACtronics. For many problems, we can offer a remanufacture solution. These problems are most common:

Tips before sending the ECU for repair

Many active error codes are usually a result of a defective fuse, a defective relay or a broken wire. So don't think immediately that the ECU is defective, often the cause of the error codes is elsewhere!

Removing the ECU is not very complicated.

Mounting the ECU is usually not too difficult either:

If you have a Bosch EDC15 C7 ECU with faults in your workshop, register your remanufacture order now.  Do you have a different fault or do you have a question for us? Then feel free to contact us. We are happy to answer your questions via e-mail or phone.

Are you a private person and do you have a problem with your Bosch EDC17C7 ECU? Please contact a car company in your area and ask them if remanufacture via ACtronics is possible. An overhaul is much cheaper than new, while the quality is at least as good!