The 3 main reasons for a defective ECU

The ECU (Engine Control unit) is one of the most important parts in modern cars. This part, also known as the engine control unit, plays a fundamental role in the control of the engine. Unfortunately, defects in this part are not uncommon. That is why in this article we will discuss topics like: the operation of an ECU, the main symptoms of a faulty ECU, possible causes of the failure and the solutions that ACtronics can offer for this.

The operation of an ECU As the word engine control unit suggests, the ECU manages the control of the engine. The ECU is an engine management computer that controls for example the throttle body, the moment of ignition and the pressure in turbo. On the basis of the data that the control unit receives from the various sensors, this information is processed in the so-called field of reference of the ECU. The control unit converts this data into an action, namely the control of the actuators. The ECU has to process information from often more than a hundred different sensors. Think of information about the outside temperature, the position of the accelerator pedal, etc.

The main symptoms of a faulty ECU

But how can you tell that an ECU is defective? There are a number of symptoms with which a defect can be identified. Well-known examples are: engine failure light (MIL light) that lights up on the instrument cluster, car that goes into emergency mode, the car shakes or when the engine no longer runs on all cylinders. It can all indicate a malfunction of the engine control unit. However, these observations don't provide a complete indication that the engine control unit is faulty. For this purpose the car will have to be diagnosed in the workshop by, among other things, making a test drive and viewing the live data. Reading out fault codes can provide further detailed information about the defect, as certain fault codes are often found in combination with a certain engine control unit. For example, error code P0354 is common in the Siemens Simtec 71-series. This error code indicates problems with the control of the ignition coil. 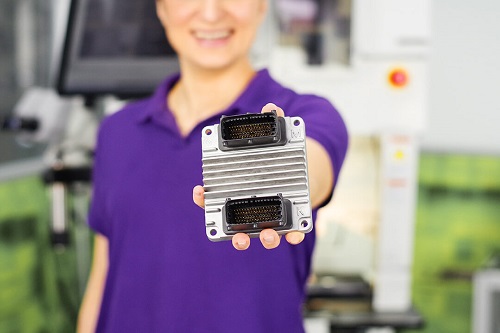 All the above mentioned symptoms have of course a trigger that causes the defect. These causes can be very different per ECU. One of the main causes is a short circuit in the wiring or in components, which can cause them to burn out. This short circuit is often caused by external influences, such as the wrong start of the car. This is a cause that applies to a wide range of ECUs, although some engine controllers are more sensitive to this than others. An example of such a part is the Valeo J34P, which has been used in several models of Citroën and Peugeot.

Another common cause is the vibrations that the ECUs have to endure over the course of time. The sensitive electronics mounted on the circuit board of the ECU are often mounted in a solid housing, to protect the component. However, over the years, the vibrations that the part has had to endure can still cause it to fail. This can cause the bond wires (or connecting wires) in the control unit to malfunction. The Magneti Marelli IAW 59F / 59M / 5AF / 5AM, which is mainly used in various Fiat models, is such an ECU that is sensitive to vibration.

A third common cause is damage caused by temperature influences. Especially in the summer, when the temperature under the bonnet rises to great heights, the ECUs are having a hard time. The location where the control unit is mounted plays an important role in this. The Delphi Delco Multec HSFI which has been used a lot in several Opel models is such an ECU, because it is mounted on the side of the cylinder head. Thanks to this heat, the bond wires are often the weak spot.

Have the ECU unit remanufactured

Do you have a defective control unit that you would like to have working again? We might be able to help you with a remanufacture solution! Take a look at our complete overview of the ECUs that we have to rebuild. Chances are that your ECU will also be eligible for revision. For more information about our products, please feel free to contact us. Please note: we only work with car companies and garages!